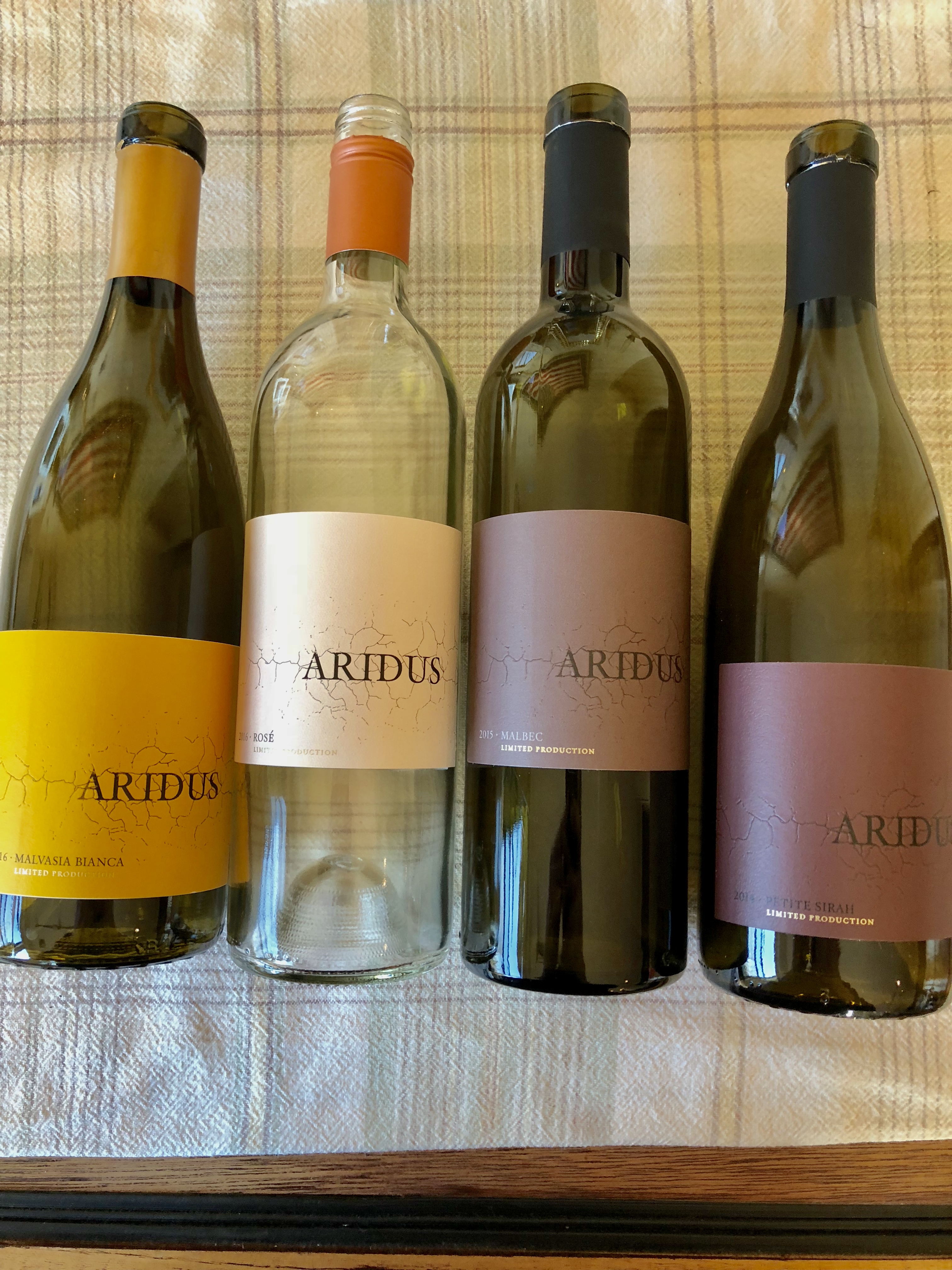 Arizona Continues its Evolution at Aridus

Arizona’s wine scene remains a bit of a black hole for me. I’ve written about visits to AZ Stronghold and Fire Mountain, which began to clue me into the state’s potentially bright wine future, but beyond that and a few bottles of the state’s most famous winery, Caduceus, that had been it for me. When samples arrived from Aridus Wine Company, I was excited for the opportunity to try another producer.

In preparing to write this post, I wanted to see how much wine the state was producing, and it is paltry. In terms of bulk wine, Arizona produced less in 2017 than Arkansas. Florida produced five times more in the same year than did Arizona. Indiana nearly quintupled Arizona’s production. In total, the state produces 0.0000003% of the nation’s bulk wine. In terms of what goes into bottle, the percentage drops a bit to 0.00000026%. Though I don’t have numbers, I know a decent amount of the state’s wine comes from grapes sourced outside the state. Still, that Arizona has any national reputation for wine, and it does have a budding one, is staggering giving its contribution by volume.

Having had good wine from Arizona, when I spoke to Aridus’ winemaker, Lisa Strid, I asked her the same questions I’ve asked other winemakers from the state: is Arizona ready for the national stage, and what’s keeping it from mainstream conversation? She boiled it down to the state’s biggest limitation, water. Arizona has long had water issues, and it’s scarcity, especially where grapes grow best, limits volume and quality. Water availability hasn’t been an entirely solvable problem for the state in general, so marshaling more for the luxury that is wine production hasn’t been a winnable fight. Without sufficient water, they can only make so much wine. Full stop.

Working with what water they do have available, Aridus gets juice from its own vineyard and other sources both in and out of the state. Right now, only some of its whites are coming from estate fruit, while the reds haven’t come online yet, though Aridus is making a concerted effort to ramp up planting and production of more of its own vines. Their vineyard is in Pearce, located up against a stream-fed hillside where there is slightly less water pressure. The site is also at a higher elevation than the rest of the AVA, which helps to moderate the temperature a bit. All of this helps the site do a better job at retaining acid in the grapes, a constant challenge faced by Arizona wineries in achieving lower pH levels. As more of their estate fruit comes on-line, hopefully the wines will hit lower pH and achieve more brightness.

Aridus produces a wide range of wines, and the four I tried are best described as “big.” All of the reds get oak treatment, typically around 18 months in anywhere from 40% to 100% new oak, most of which is French. On the white side, they go for “a lot of expression of the grape – bold aromas and flavors.” They’re bold in structure, too.

Lisa is high on their Malvasia, which I tried along with the Rosé (of mourvedre), malbec and petit sirah. I was able to confirm that the house style described came through in the wines. The Malvasia was indeed expressive, and had an interesting texture that gave substance to its volume. The Rosé was a very nice full-bodied sipping wine, and one that I think is probably best had on its own due to its lower acid. Both the malbec and petit sirah are big bodied wines that show their extensive oak, which dominates at the moment. While alcohol levels on both are modest, I do wonder if the higher pH can facilitate better integration of oak and drive more expressiveness with age.

What I find most exciting and interesting about Aridus is the evolution it could take as more estate fruit is cultivated, which sounds like promising material from which to make wines of increasing quality. Lisa is working with a big variety of grapes, not all of them from Arizona, and so she’s having to deal with a plethora of evolving challenges and conditions. This is standard for experimental winemakers in emerging wine regions. Lisa recently returned from a harvest in Australia where she learned a few new tricks that she wants to try out at home. More vines will go into the ground at the Aridus vineyard. She’ll have another vintage under belt at the end of this year. Other Arizona winemakers will try and share new knowledge with each other. All of these are necessary to developing a wine region and house styles, and it’s fun to watch it happen.

2016 Aridus Malvasia Bianca: Ripe, tropics-drive nose of honey, melon-dew, cantaloupe and big pineapple. Rich vanilla curd swirls around the edges, while there’s just a wiff of green vegetalness. It’s medium weight on the palate. The acid is modest and well-integrated into a slightly sweet and round structure that has a bit of a grainy texture that’s diversifies things nicely. Flavors are bitter-sweet lemon, vanilla, Starfruit, green papaya, apricot, white flowers and dandelion flower. A pleasant sipper with an interesting texture. 88 points. Value C-

2016 Aridus Rosé (of mourvedre): Classic Mourved rose nose of crushed blackberry, cherry and bramble berry, pepper and a little vanilla. Towards the end of the full body rose spectrum, it’s round and lush and well-polished – a velvety mouth feel. The acid is light but enough to add needed mid-palate lift. The tannins get slightly grainy on the finish. Flavors are all sorts of crushed berries – red, blue and black – along with vanilla pudding, marzipan and a slight hit of saline. Downright lovely, it’s probably best on its own rather than with food. 88 points. Value: C-

2014 Aridus malbec: The reticent nose boasts a hedonistic compote of blackberry, blueberry and cherry that is lifted by heavy baking spices. This one is medium bodied with a bit of extraction, it wears its malolactic fermentation and oak influence on its sleeve: baking spice, oak vanillin and a buttery finish. Acid is modest. The fruit is modest cherry, red currant and Acai. With air it develops some very welcomed graphite minerality. Not quite sure what to make of this one, the oak influence is dominating at this point. It may have enough acid to survive some evolution, which hopefully would allow the oak to better integrate. 89 points. Value: B

2014 Aridus petit sirah: What an inky nose, it saps with wild berries, high-toned orange zest, cracked pepper and sea brine. Closer to full-bodied, the acid is bright and the tannins grainy and chewy, likely smoothed out a bit by the oak. The fruit is a bit darker on the palate, coming in the forms of blackberry, cherry, strawberry and blueberry. Oak baking spices are quite prevalent, while black tea, pepper and cocoa finish things off. As time goes this gets more savory. It develops mesquite and iodine. While this has under half new oak, it has a big impact. Not the truest to type, it is nonetheless well-done and enjoyable. 89 points. Value: B

3 thoughts on “Arizona Continues its Evolution at Aridus”