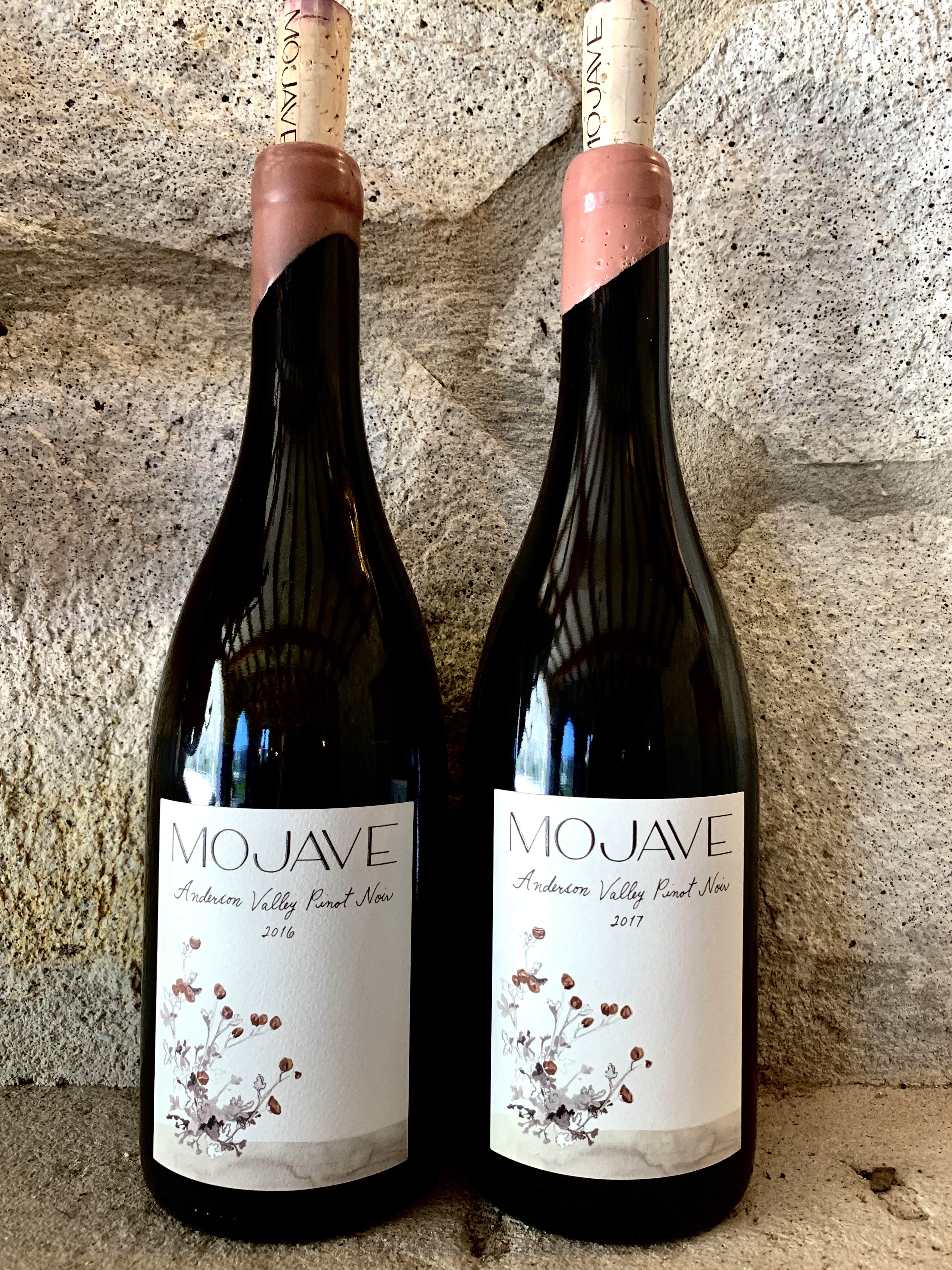 A few weeks ago I visited Napa Valley with two friends who had never been to the area before. The idea was to visit two wineries per day that would collectively give them a decent spectrum of what Napa and its environs have to offer. Wineries include Napa’s Rombauer, Failla and Chimney Rock, and Sonoma’s Carlisle, Arnot-Roberts (which makes wine from fruit from several parts of California) and Mojave, which is an Anderson Valley and Santa Cruz pinot noir project made in Napa.

Those wineries cover a pretty good diversity of styles, vineyard sourcing, business models and production levels. Next to Rombauer and Chimney Rock, Arnot-Roberts may stand out as a particularly niche and small producer. By all accounts that observation would be right, but if we want to think small in this context, Mojave is miniscule in comparison to all of them. Arnot-Roberts measures its production by the thousands of cases, at least; Mojave barely hits the second hand when counting barrels (figure roughly 25 cases per standard barrel).

Mojave is the side project of Becky George, who is the winemaker at Kelly Fleming Wines. I first met Becky in late 2017 at Kelly Fleming to taste those wines. It was my first winery visit on that five day trip, and I consider myself very lucky to have started the trip there. The wines are anything but the prototypical tannic fruit bomb that I expected to be inundated with during the visit. It was very helpful to start with Kelly Fleming’s reserved and elegant wines because it helped to calibrate my expectations and put me in a much better mindset to evaluate subsequent wines.

While on that 2017 trip, I was able to try Becky’s inaugural Mojave release, the 2016 Monument Tree Vineyard, and enjoyed it enough to buy three bottles when I returned home. My experiences with Becky on that trip were enough to name her one of Good Vitis’ 2017 Tastemakers, a distinction given to those individuals who changed how I thought about and appreciated wine that year.

I still haven’t opened any of my 2016 Mojaves, so when I was planning this more recent trip and received the 2017 release email, I sent Becky and note and asked if she’d be around to taste it with me. When I arrived, she had opened the 2016 and 2017, and we were able to try the 2018 in barrel as well as a 2018 pinot from Santa Cruz that she’s making for the first time.

One of my favorite things about Becky is a seeming contradiction: her wines are exceptional – both Mojave and Kelly Fleming – yet she’s only really getting going as a winemaker. She is very open to others’ thoughts, and is very outgoing in terms of soliciting advice from more experienced winemakers. The amount of promise she holds is unusually high.

Another of my favorite things about Becky is her decision to focus her side project on pinot noir because it is a very different grape compared to those she makes at Kelly Fleming. Fleming wines are almost entirely Bordeaux varieties (the exception is the Big Pour blend, the current release of which includes 15% syrah), and have a classically constructed profile hedging towards the Bordeaux style while maintaining the purity and density of Napa’s fruit notes.

Similarly, Mojave pinot also hedges towards the Burgundian style while maintaining the purity and density of Napa’s fruit notes. Yet this pinot noir profile is, at least from my experience, rarer than the Fleming profile of its type in the context of California. I appreciate that in both labels Becky pursues what seems to me to be the same goal: make old school wines that retain their inherent Californian DNA, meaning all the natural characteristics of the grapes that get lost when pushed towards higher alcohol and tannin levels.

Monument Tree Vineyard is located in the northern end of Anderson Valley, which makes it notably cooler than Napa. Making it cooler yet, the vineyard is northeastern-facing and planted on a hillside, which protects the vines from afternoon sun. This location and orientation does all sorts of things for the grapes, namely that it slows maturation and prevents high levels of sugar development, which helps develop higher acid levels, lower alcohol and more non-fruit nuance and complexity than vineyards further south. Becky uses certain processes, like modest amounts of whole clusters during fermentation and significant portions of neutral oak, that highlight these cool climate eccentricities in the wine, which are readily apparent.

The 2016 vintage was, according to many winemakers in northern California, a near-perfect vintage in that it had desirable temperatures that were consistent, the right amount of timely rainfall, and no real weather incidents to speak of. It was a great vintage for Becky to launch her brand, allowing her to put a solid foot forward into the market on day one.

The 2016 Mojave has developed nicely since I tasted it roughly a year ago, and as good as I remembered it being. Mojave Monument Tree pinot noir is California pinot for Burgundy and Oregon pinot lovers, which means it is a bit funky. It is full bodied and ripe because even Anderson Valley has real warmth despite its cool California climate, but the acid is juicy and the wine remains agile. It has huckleberry, herbal and damp earthy flavors and aromas that harken me to the Nuits-Saint-Georges and Volnay regions in Burgundy. It is drinking well now, though I will try to refrain from opening the first of mine until at least 2020, if not longer, as I think it will get better with age.

2017 was an entirely different and more challenging year. Heat spikes started in June and routinely lasted three to five days. Periods this long are enough for the vines to go defensive and shut themselves down, and this start-stop pattern prolonged veraison (the onset of ripening when the grapes turn from green to red and begin to develop sugar), which took up to six weeks depending on the location (an exceptionally long time).

Tasting the 2017 was challenging, not unlike the vintage, because it kept changing. Start the fruit! Stop the fruit, start the earth! Now, add the fruit! At first I called it more fruit-forward than the 2016. Fifteen minutes later, I changed my mind. Twenty minutes later I was returning to my initial impression. The fruit is darker in the 2017 regardless of whether it’s more prominent in the profile than the 2016 (I’m still undecided). I get serious plum and dark cherry. There is a spicy note that isn’t apparent in the 2016, and it does seem more brooding in stature and flavor. But the Burgundy funkiness is there, like the 2016, albeit it slightly quieter at this stage. I do suspect the wet forest and floral aromas and flavors will become more prevalent with age.

The 2018 barrel sample produced the most brambly of the three vintages. I also picked up a saline quality, though that could be residual carbon dioxide, and some tobacco and violet flavors. But that’s all you’re going to get from me because I don’t place much value in barrel samples, and I don’t think you should too, either. Especially when critics score them. I’m on my high horse here. Wines go through an incredible amount of development in barrel, so placing any credence in reviews based on barrel samples risks getting a wrong impression. Some wines get better in barrel, some get worse. It can go an infinite amount of ways. Here’s what I’ll say about the 2018 Monument Tree Vineyard in barrel: it’s good now, and I imagine it will get even better and I’ll like it even more after it’s been bottled if things don’t go wrong.

We also tasted Becky’s first non-Monument Tree pinot noir, a 2018 from the Hicks Vineyard in Santa Cruz. The site sits just five miles from the ocean, which puts it squarely in a maritime climate. If you like cold climate pinot, this is as legit as they come. One of her two barrels of this one is neutral, the other new. The neutral barrel has spectacular gamey and floral notes and a masculine structure driven by acid. The new barrel (medium toast) is rounder and softer with more apparent tannin. She is making the Hicks Vineyard in the same fashion as the Monument Tree because, as she described it, it’s like going on a first date: since you don’t know the person (wine), you stick with what you know in your interactions with them. I’m really excited to try this when it’s released.

Becky is a great winemaker, and will only get better. I imagine her wines will follow a similar trajectory. If you get excited by discovering something new on the ground floor, and if you like old school pinot noir, then Mojave is a great project to sign up for now.