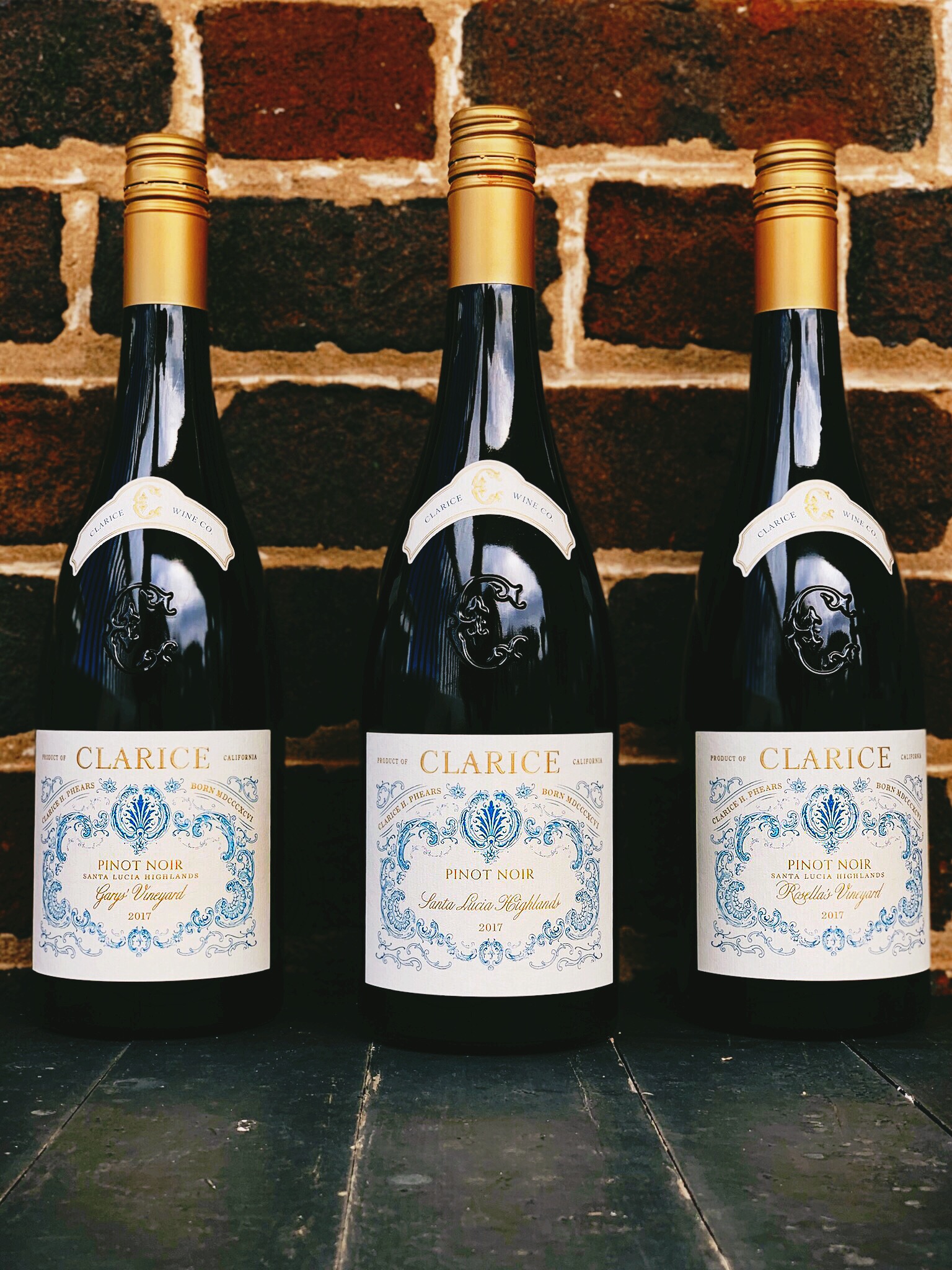 Clarice is Three for Three

A few months ago Kayce and I got to enjoy an evening with Adam Lee here in Chicago. He was in town for a few days and his last night overlapped with my first night back from a work trip. Work had and continues to be hectic, hence the dearth of Good Vitis posts in 2021. Towards the end of dinner, Adam suggested I try the 2019 vintage of his Clarice label and do a quick write up. While I’ve said ‘no thank you’ to several sample offers this year, I wasn’t about to decline one of my favorite domestic pinot noir producers, nor a producer who I’ve been able to follow since their first vintage. You can find coverage on the 2017 and 2018 vintages here and here.

These are wines that consistently show the promise of at least three to five years of positive evolution, if not more. However, with Clarice only three vintages deep, we just don’t know whether and how that promise is fulfilled. One way to test a wine’s aging mettle is to taste it over multiple days, and I put the 2019s through the battery of five days. A few weeks later, Adam and I caught up by phone to talk them through. I’ll start with the conversation, and end with the wines.

As a growing season, 2019 split the difference weather-wise between the inaugural 2017 vintage and subsequent 2018 in the Santa Lucia Highlands, where Clarice sources its fruit. “It wasn’t as hot as 2017 or as cold as 2018, but [we] got three to four more inches of rain. So there was ample water available for the vines,” Adam told me.

Adam farmed similar to 2017, which meant leaving more fruit on the vine and thinning at veraison, which is later than usual. “The vines had enough energy [due to the ample water], so if I had taken the fruit off earlier, I was afraid the vines would have directed the [water-driven] energy into growing more shoots and leaves, and not [maturing] the fruit.” So he left the fruit on the vine longer, and later in the season took thinning down to the normal level. And because the heat ran the gap between 2017 and 2018, he split the whole cluster difference between the two as well.

To help with concentration and structure, Adam did a small bleed off, leading to wines that he calls more structured than either the 2017s or 2018s were at this stage in their development. “I talked to another winemaker, who said it took a lot longer than usual to extract the color [from the skins]. It didn’t come until the very end of the maceration cycle [for me]. I don’t know why, but it’s weird.” Adam wasn’t bothered by it, though, because he had already started to get away from pushing color extraction. “It’s not the end-all-be-all [for pinot],” he noted.

He did, however, leave the juice on the skins “for a little longer [than usual], a couple of additional days” compared to the two previous vintages of Clarice. Beyond that, he “didn’t do much of anything to drive extraction” other than the bleed off. “It’s not an unusual method,” Adam said, about this approach vis-à-vis the nature of a growing season like 2019.

When Adam and I first connected in 2019 on the inaugural 2017 vintage, we discussed the challenge of making a winery’s first vintage using a significant portion of used barrels. When starting a new winery and wanting to use a mix of new and used barrels, one is faced with the challenge of sourcing used barrels and ensuring they are properly clean and free of bacteria, which is not the easiest thing to independently verify. With three vintages under Clarice’s belt, I wondered if Adam had safely gotten beyond the threat of unclean barrels. In short, he has. Adam had sourced those used barrels from a winery and winemaker he trusted (and had trained himself), and as Clarice entered its third year Adam has avoided the risks associated with purchased used barrels. As Clarice evolves, though, so too does its use of barrels.

“For the [2019] Santa Lucia Highlands [designate], [the barrel regime] was 27.5% new oak. That’s not out of the range of where it’s been before, and was kind of the plan all along. The SLH has never been a declassified wine, but rather its own wine that happens to be a blend [of multiple vineyards].” The Rosella’s Vineyard is about 50% new oak, “which is a lot less than it’s been [before]. Gary’s is 90% new oak, which is more than it’s been.”

Adam continues to experiment with cooperages. The breakthrough in 2019 was Marsannay. “A few years ago, I tried a 3-year air-dried Marsannay, playing with it with some Santa Lucia Highlands fruit at Siduri Winery [and I liked it]. With Clarice, the first couple of years, I did two Marsannay barrels each and didn’t love them. I was about to give up in 2019, and then the ultimate Rosella’s blend turned out to include a significant amount of Marsannay barrels. Something happened, something clicked, and the Marsannay went back and produced the way it had with Sirduri.” Marsannay, it should be noted, does not feature in either the SLH or Gary’s bottlings.

Total production is down in 2019 because Adam decided to steer five barrels he felt were subpar away from the released wines; these barrels are going to charity. SLH production was only eight barrels, while Rosella’s and Gary’s were ten apiece. “I spent a lot of time on the blends,” Adam explained, adding that “it always takes a lot of time, but some years the blends come together more easily.” 2019 was not one of those years. “I actually took a few weeks off between blending efforts because I needed to reset the brain and taste buds.”

The resulting wines demonstrate consistency in the Clarice progression, meaning the development of deeply complex wines that reflect their terroirs as made by a winemaker with a sixth sense of how to read and react to the growing season to make something better than what other winemakers could achieve with the same fruit. While Adam called the 2019s the most structured of the label’s three vintages, I found them to be the most accessible. While “structured” and “accessible” don’t have to be antonyms, it’s hard not to treat them that way. Accessible does not mean a lack of structure, but by my palate I project a quicker evolutionary arc for the current release than the previous two. I always hesitate to disagree with a winemaker, an actual professional, when it comes to things like this, but I’m going to hold firm on this one and die on the sword if necessary.

On this point, I looked back at my notes from the 2017 and 2018 vintages, and made a few notes about projected evolution and longevity. For the Gary’s Vineyard, I projected the 2017 would take the most time to reach peak drinking, followed by the 2018 and then the 2019. Rosella’s was similar, with the 2017 and 2018 seeming to require more time than the 2019. Only with the SLH did I find the opposite to be true, projecting the 2019 in need of a year or two more than the earlier vintages. Take that for what it’s worth.

While the SLH hasn’t consistently been the wine of every vintage for me, by year three I’m comfortable saying that it is my personal favorite of the lineup, and shines its best in the current release.  The dark nose features blackberry, boysenberry, cherry concentrate, Earl Gray, and cassis. It developed a secondary cocoa overtone on day two. Medium bodied, its thick tannin offers Earl Gray tea and star anise notes. By day two the tannins had disarmed a bit, smoothing and elongating nicely while picking up a peppery note on the back end. The juicy acid core delivers stewed plum, cherry, baking spice, and salmon berry. Day two added mountain strawberry. The balance and structure is impeccably built, this one should be set aside for at least three or four years and followed over the following five years, at least. 96 points, value A.

Like Adam, the 2019 is the first vintage in which I’ve preferred the Gary’s Vineyard to the Rosella’s Vineyard. The nose is a moving target at the moment with extended air exposure adding and subtracting in waves. The most consistent aromas include Bing cherry, mountain strawberry, lavender, black plum, weathered leather, and black currant. It is medium bodied with smooth, lush, and long tannin that parallels juicy, bright acid. The elegant and weightless structure dazzles right now. The flavor profile includes Bing cherry, blood orange, cranberry sauce, cardamom, and black pepper. It feels like the tannins are elevated at the moment, waiting to drop and broaden with some age. Very accessible for such a substantial wine at the moment, I can see this entering a dumb phase within the year that might last two or three years before emerging a weightier, more layered version of itself. 95 points, value A-.

Finally we have the Rosella’s Vineyard. More reticent on the nose than previous vintages at this stage, I was able to coax a briar patch of dark crushed cherry, blackberry, and plum sauce, with star anise and clove putting a toe in the pool. The fruit holds on the second day, while the spice is replaced with potpourri. Nearly full bodied, the tannins are dense and slightly grainy, taking their time to reveal a core of pleasant acid. Flavors include cherry, plum, blackberry, tobacco leaf, wet soil, and just a touch of graphite minerality, all with a slightly savory twinge. The density of this suggests this has an upward trajectory that, if you can sit on this for a solid three or four years, promises reward. 94 points, value B+.

Unfortunately there will be no 2020 vintage of Clarice due to the fires the swept through California. Combined with the slightly reduced 2019 production, that means availability of Clarice will be highly limited, especially outside the company’s club, until the 2021 vintage is released. As to any desire to expand the line up in the future, Clarice is “truly going to be these three wines, it’s never going to get any bigger,” Adam told me.

While we customers impatiently wait for the 2021 Clarice release, Adam continues to experiment and grow his list of special projects. His newest side project is called ENOW, which is a grenache and mourvèdre blend from Paso Robles that rolls out with the 2020 vintage. “Enow” means “enough” and is a homage, if you will, to the rough year of 2020. The label explains:

You can find Adam’s various projects online by heading to Clarice’s website, and the best way to track the wines down is to buy direct from the producer. I can’t recommend Clarice enough for those who like serious pinot noir, and his side projects like Beau Marchais offer opportunities to try serious if experimental wines and winemaking approaches for those palates looking to expand themselves.