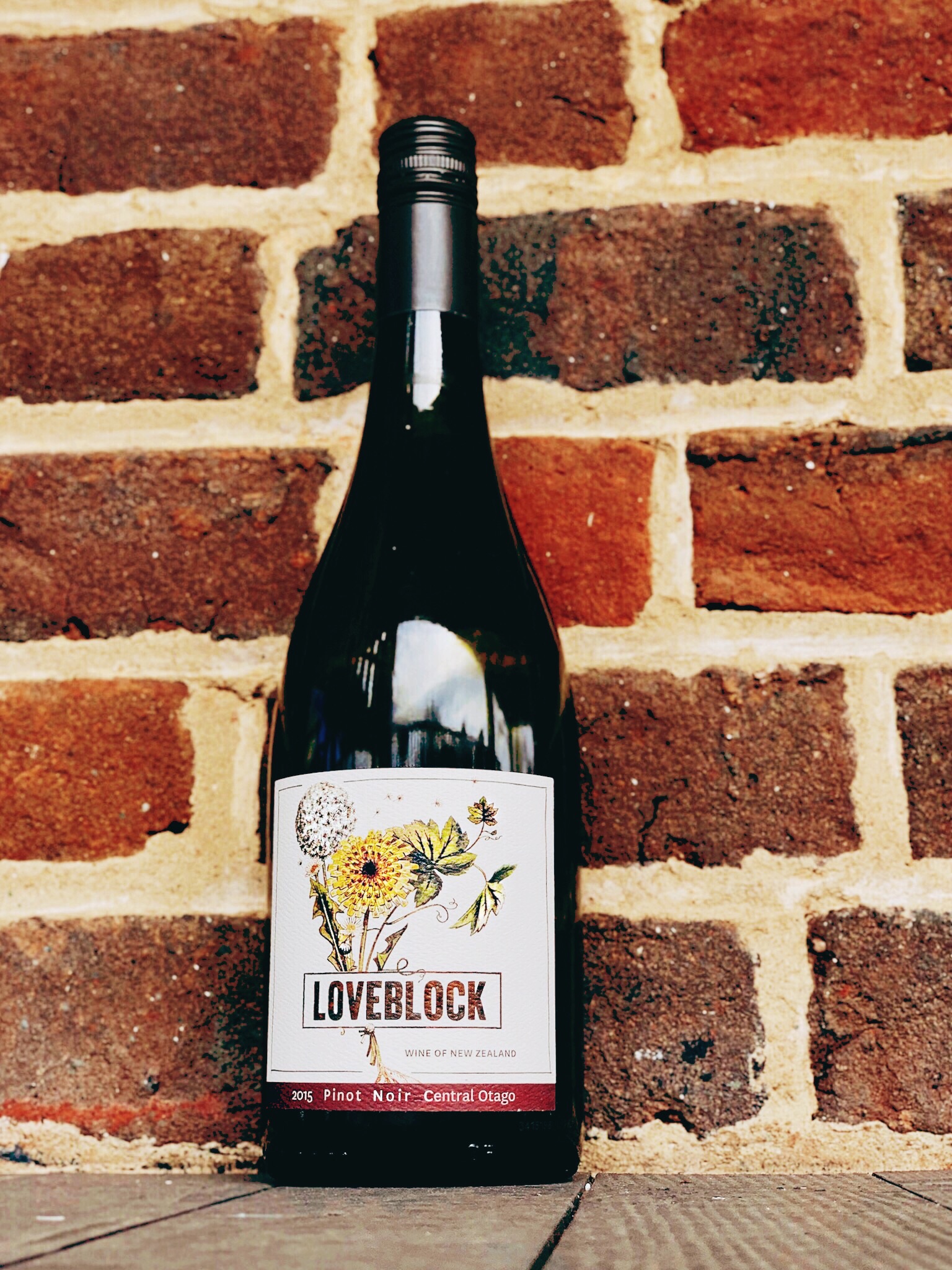 That’s a bold statement, I know, but consider these two facts: 86% of New Zealand’s global wine exports are sauvignon blanc, while 95% of what they send to the United States is sauvignon blanc. When people think “wine” and “New Zealand,” they think sauvignon blanc. And then almost immediately they probably think Kim Crawford, which, as the largest selling New Zealand sauvignon blanc in America, is the country’s the most ubiquitous.

Erica and Kim no longer own Kim Crawford, nor do they have any role in its operations, so it’s understandable if they’ve grown tired of talking or hearing about it. But the success of the label is their own doing, so I imagine they’ve learned to deal, if for no other reason than it gave them the resources necessary to start a new winery called Loveblock, which, while an endeavor to make money, is at its soul a passion project.

“Loveblock is completely different [from Kim Crawford], it’s a philosophical thing,” Erica explained to me over breakfast in Washington, DC. Reflecting back on their Kim Crawford experience, it was clear that Erica and Kim wanted to do things differently with Loveblock. The first main difference: they now follow organic farming practices and treat the land with much greater care and deference.

“New Zealand grows things. We grow grass to feed the cows to make milk for the world. It’s an agrarian economy, but I firmly believe that what we do to the soil is not good, it is not right. I did a deep dive into what we do with the soil, and it was actually devastating.”

With viniculture more attuned to nature, it is then “about doing what we want to do, drinking the wine while we’re making it, and making wine in the style we want to drink.” What is that style? When it comes to sauvignon blanc, it is “moving away from the bell pepper and getting to the peach and passion fruit.” Meaning, they’re moving on from Kim Crawford Wines sauvignon blanc.

Erica noted that “the world has been drinking New Zealand sauvignon blanc now for twenty years and there are people who want something different from the big lean style. It’s not everybody’s cup of tea.” Though “both styles are still growing” from a market perspective, “there’s lots of room for an evolution of style, that’s for sure.” That said, “at some point people will tire of [the lean style], which is why it’s really important that we work on an evolution of style.”

Loveblock and Kim Crawford are indeed dramatically different wines. My wife, Kayce, who does a spectacular job with the pictures on this website and Good Vitis’ social media, is not a sauvignon blanc lover. In general, it’s too bitter for her. But when we tried the Loveblock sauvignon blanc, not only did she finish a full glass, but she asked for a second.

The Loveblock style of sauvignon blanc is rounder, more tropical and complex. My tasting note on the wine describes an expressive, jovial and entertaining wine with more intrigue than the typical New Zealand profile tends to inspire in me:

The aromas leap from the glass, wafting notes of bright lemon and lime citrus, slate and chalk minerality, pear peel, white pepper and faint tarragon. Relatively full-bodied for the variety, it bucks NZ sauv blanc stereotypes with its mouth-filling lushness and juicy, rather than lean, acid that balances nicely with just the lightest touch of sweetness. The texture and structure are gorgeous. The flavors offer substantial depth, featuring lemon, lime, peach and mandarin citrus to go with subtle vanilla, hay, pepper, crushed gravel and mango. An impressive effort. 91 points, value: A.

Beyond the differences in farming practice, in order to achieve this profile, the Crawfords do two things differently from their former approach. First, they manage the canopy quite differently. Canopy refers to the leaves of the vine, and is important for a number of reasons. Notably, they help regulate grape temperature and sun exposure and use up some of the nutrients extracted by the vines from the soil in order to grow themselves. Removing leaves, a process called “leafing,” increases the sun exposure and temperature of the grapes and allows more of the nutrients to flow into the grapes. Most notably in the Loveblock case, they leaf because following organic protocol means feeding the vines less nitrogen, and the grapes therefore need a higher level of sun exposure in order to stave off high levels of something called pyrazine, which is an acidic organic compound that develops in the skins. Pyrazines give wine a bitter taste, and whereas they are purposefully developed to create that famous New Zealand lean style, they are something Loveblock looks to avoid at high levels.

The second difference in approach has to do with oxygen exposure in the winery. By exposing the wine to more oxygen, it develops the tropical fruit flavors that the Crawfords are seeking in the Loveblock profile that they avoided with Kim Crawford. They also use a small amount in oak (around 10%) and let the wine go through full malolactic fermentation, techniques not used at Kim Crawford either.

“I don’t see Loveblock competing against Kim Crawford,” Erica said. “They’re completely different styles and price points, and they are sold in different places. Loveblock is within the trade, at smaller speciality stores. Kim Crawford is at the big chains and groceries.” The differences are night and day.

Sauvignon blanc isn’t the Crawford’s only passion, nor is it the only wine they make. Their initial offerings send to the US include a pinot gris and pinot noir, both of which are on par with the quality and innovative style of the sauvignon blanc. A theme consistent among the three is just how expressive the wines are. From the moment the cap is unscrewed, the wine leaps out of the glass aromatically and dances on the palate.

The pinot gris has a very expressive, fresh nose featuring beautiful flower petals, various melons, stone fruits and just a bit of soap. On the palate it’s a crispy medium weight with bright acid and serious structure. The flavors are almost a direct match of the nose, but differ a bit of toasted marshmallow and custard that add depth. It finishes with big hits of white pepper and stone minerality, the latter of which adds some palate grip. 88 points, value B+.

The pinot noir may actually be my favorite of the three because of just how good a value it is, and how well it balances new and old world styles. The nose is an interesting juxtaposition of fruit and funk, offering ripe cherry, cranberry and tutti fruiti on one hand, and wet asphalt, fungal underbrush and barnyard on the other (unlikely to be Brett-induced). It smells more strongly of funk than it tastes, but there is a slight indication of it on the palate as well. I happen to like how this wine wears that profile. In the mouth, it is medium bodied with bright acidity and fine, densely grained tannin. Flavors touch on a cornucopia of fresh and bright red plum, muddled red cherry, cranberry sauce, mild baking spice, wet fungal dirt and moist cedar. The finish remains very juicy. A nice, earthy pinot noir with an interesting profile and great value. 91 points, value A+.

Much more varieties of wine are listed on their website, including some like an orange sauvignon blanc that suggest future experimentation over the years. When I say “over the years,” Erica stressed that Loveblock “is an intergenerational project. We’re playing the long game.” Their son, who is 25, is a qualified winemaker and currently “doing his vintages around the world,” after which he intends to land at Loveblock.

The project is also going to be entirely estate for the foreseeable future, and beyond. “Present plantings produce about 65,000 cases,” Erica told me, adding that “there’s a long way to go in terms of expanding because there’s a lot of space left to plant. This will allow us to remain estate as our production increases.” Further, “estate is important because it allows us to control the viniculture and winemaking from end to end.”

The sense I get from talking with Erica and trying the initial Loveblock lineup of wine is that we should plan to see Loveblock around for a long time, to expect the already good wine to get better, and, most excitingly, to view Loveblock as it evolves as an early indicator of where the New Zealand wine industry is going.

Erica and Kim have established their credibility in that latter regard with their trend-setting Kim Crawford Wines, and though they have to build the reputation of a new label from scratch, their skills, experience, vision and global connections will surely allow them to scale Loveblock a bit quicker than most could with a new label. These initial three wines are all good, with the sauvignon blanc and pinot noir particularly compelling wines. I’m excited for future vintages and the new varieties as they arrive in America. More than that, though, it’s a compelling project in terms of its goal to get ahead of the curve, find a new style for New Zealand and continue the evolution of one of the world’s great and under-appreciated wine regions. Loveblock will be an interesting winery to follow.

One thought on “Loveblock Is New New Zealand Wine”