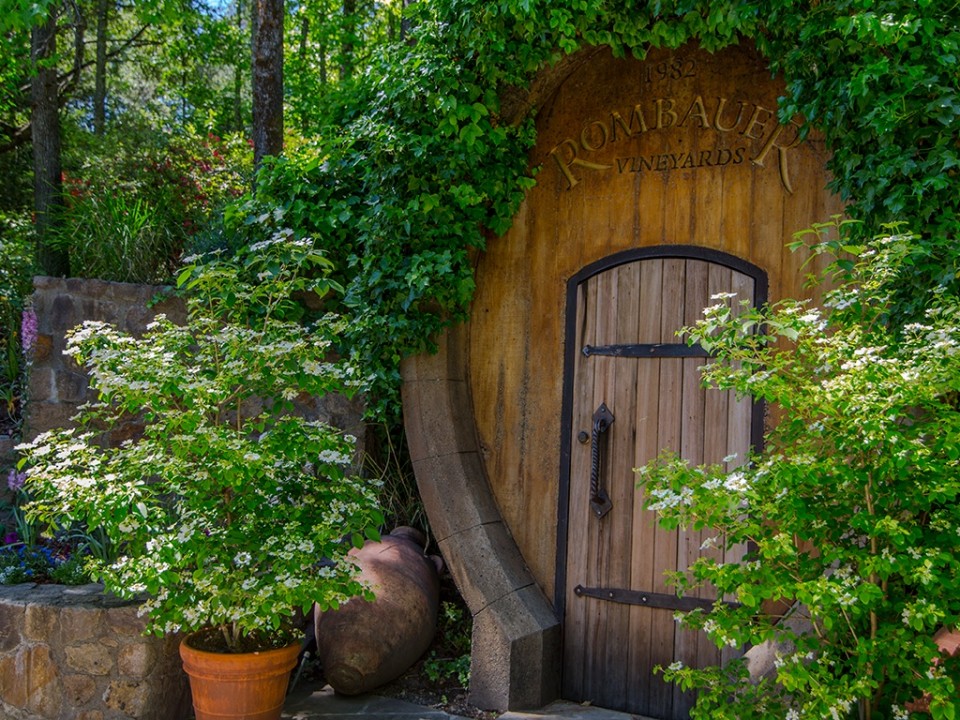 I started Good Vitis to document my journey to find as much good wine as I can. Much of this journey had been underway well before the start of the website, although the winemaker dinner has been a new excursion owed entirely to this blog . Until Good Vitis I had avoided these events because they seemed like a rip off: doing the calculations, the wine and meal seemed overpriced, even when packaged with a tasting guided by the winemaker. Four winemaker dinners (or, rather, three dinners and a lunch) later and I’ve gone one-hundred and eighty degrees: if you come across one featuring wines you like, it’s a must-attend event.

As I wrote in the post about a dinner I attended with Shane Moore of Zena Crown and Gran Moraine, “Shane was right – drinking with the winemaker makes the wine better. If this post hasn’t made it clear, he’s a very engaging guy, and loves talking about his craft. The banter was as fun as the wine, and the combination made the night. It seems to me this is why you go to winemaker dinners. I imagine the more engaging and fun the winemaker, the more engaging and fun the dinner. So long as the wine can keep up, you’re going to have a good time.” A subsequent winemaker dinner with Stu Smith of Smith-Madrone reinforced this point. A recent lunch with Richie Allen, head winemaker of Rombauer Vineyards in California, further confirmed these findings while introducing me to another example of why California deserves its reputation for outstanding wines.

The first thing to know about Rombauer is that it is obsessively focused on quality. You can say that about a lot of wineries, and a lot of wineries say that about themselves, but few walk the walk like Rombauer. I’ll give you a poignant example: somewhere between the merlot and cabernet sauvignon, Richie told us about the winery’s optical sorting machines. These machines fire the berries pasted a high resolution and high speed camera at 10 meters per second (roughly 22 miles per hour) that take a picture of each berry and, in a fraction of a second, accept or reject it based on size, color and shape. These factors combine to eliminate problematic berries that may be raisined due to heat stress, may be sunburnt, are under or over ripe, etc. Those that are rejected get a little jet of air to send them in a different direction to become what Richie called really expensive compost, while the good fruit goes on to become wine. Depending on many factors, rejection rate is between one and thirty percent at Rombauer. The machine is calibrated with each new lot of fruit that passes through the machine. As you can imagine, these machines ain’t cheap, and Rombauer has three of them. I’ve come to understand that (nearly) no cost is too much to improve quality for the Rombauer family.

I’ll give you a second poignant example: Richie’s obsession with improving barrel quality. There are three important elements to a barrel: wood origin and selection, how it is seasoned, and how much it is toasted. The last factor has the biggest impact on the outcome and has therefore seen the most industry research. However, the first two factors, Richie believes, have such an impact that the absence of sufficient research means the industry has missed the boat on taking them into adequate consideration. So, over the last ten or so years Rombauer has spent considerable time and resources looking into them because they believe it’s another way to improve consistent and desirable outcomes in the wine.

Despite it’s 150,000 case production, Rombauer has always been a family-owned winery, though it does operate with a board of directors comprising zero family members. This arrangement seems to have struck a successful balance between authenticity, quality and profitability that has allowed the winery to produce consistently excellent wine from year-to-year. Rombauer’s wines have always struck me as perhaps a bit underpriced given the quality of the juice, and so I asked Richie about their pricing logic. He explained their basic pricing structure as, I’m paraphrasing, “cost plus profit margin equals price,” which seems pretty simple but also illuminates the modest profit quest Rombauer seeks. The winery uses grapes from some of the most expensive vineyards in the country (and in the world, for that matter), yet their wines are usually, and noticeably, less than many of their competitors (and often times better tasting). Many winery owners, especially in California, satiate their ego through the price point of their wine. As Richie explained, there’s no ego when it comes to price point of Rombauer wines. When costs go up, as they inevitably will, so too will Rombauer’s prices, but rest assured the extra cash you’ll shell out isn’t being demanded to feed someone’s ego.

Richie is obviously a big reason for the winery’s good vitis. I arrived early for the lunch and had a chance to chat with him before tipoff. Richie is a charismatic guy and clearly loves what he does. Vastly experienced in a few climates (and hemispheres), he has zeroed in on what he needs to do to produce the best possible wines with the significant resources Rombauer provides. Rombauer’s confidence in Richie seems to equal his own confidence in himself, as the quality of the wines can attest. The consumer is the beneficiary.

Richie started with Rombauer in 2004 and took over as head winemaker in 2008 where he has earned near carte blanch control over winemaking and vineyard management. He’s stayed with Rombauer because they’re giving him the opportunity and means to make the best wine he can, which is support and trust he knows many of his colleagues in Napa don’t enjoy. The family and board take the same approach to this goal as Richie, which is to say that every year the wines get better, but they are never good enough. Richie has his sights set on making wine that can compete with the very best, and he knows Napa is one of the few places capable of providing the raw material to do that. With the support he has at Rombauer to do that, he knows he’s lucky and he’s seizing it to pursue his goal.

The first wine we tried over lunch was the 2016 sauvignon blanc. I’m not a fan of 99% of sauvignon blanc on the market today, largely due to the flood of myopically limey sauvignon blanc from New Zealand and California. I feared this might be another wine in that category given Richie’s Southern Hemisphere roots and winemaking experience. Does the world really need another sauvignon blanc, especially one that retails for $25? It turns out yes, yes it does. Richie has strong opinions about sauvignon blanc’s place in the pantheon of wine and a very clear idea of where good sauvignon blanc should be grown, when to pick it, and how to produce it. So far Rombauer has sourced their grapes, and while Richie is very pleased with the quality of the fruit he is on the voracious hunt for land to purchase for sauvignon blanc plantings that is “well drained and too cool for cabernet sauvignon,” which means there isn’t much of it in a place like California. Richie aims to pick his sauvignon blanc at a lower brix when it is “at peak varietal intensity” to ensure good aromatics, the most important element of sauvignon blanc. He claims that any new winemaker should learn to make a good aromatic white, and that if they can’t do it then they shouldn’t be a winemaker.

Rombauer’s 2016 sauvignon blanc offered the gorgeous aromatic profile Richie is going for with tropical and stone fruits and an undercurrent of chalk. With a small percentage aged in 5 to 6 year-old neutral oak, the body is medium in stature with firm structure and zippy acid. It offers nice depth with Key lime, apricot, peach and salty vanilla. It’s one of the very best New World sauvignon blancs out there that’s worth its price tag, and I’d up there with my personal favorites: Greywacke’s “wild” bottling and Efeste’s Feral bottling.

The 2015 chardonnay was, as always, a gold standard for California chardonnay, an all-around iconic wine. Richie explained Rombauer chardonnay has having five core components that fall into a natural balance: (1) ripe fruit, (2) vanilla oak, (3) a creamy palate, and (4) buttery finish all bound together by (5) good acid. “If you don’t have all five, you have a Rombauer competitor.” Well, mission accomplished. It’s weighty without being overwhelming. It has green apple, butterscotch, zesty lemon-lime and toasted oak. It’s among the best values in quality chardonnay from anywhere in the world, and a go-to high value answer for lush but non-butter bomb California chardonnay along with Smith-Madrone Winery.

We then transitioned to the red wines with the 2013 merlot. Like all Rombauer wines, this one was hand-picked and the berries were de-stemmed using a berry shaker instead of a de-stemmer. One-third of the vintage was fermented in barrels that were rolled instead of pumped over, an approach Richie pursues to fill out the mid palate of the finished product. The end result is quite good. The nose is bursting with cocoa, cherries, black current and plum, graphite and a small amount of iodine. The palate is full bodied offering just enough acidity to balance great density that doubles down on dark cherries, mocha, and smoke. There’s a nice dose of saline in the mid palate. This is a great wine to pour blind for people who claim they don’t like merlot, and just as great to pour for those who say they do.

Like the merlot, the 2013 cabernet sauvignon saw barrel fermentation. 70%, to be exact, was fermented in barrel. This one is still young. The nose is still reticent but its dark aromas tease what will likely blossom into a tantalizing bounty of full-blown scents. It’s full on the body, very smooth and round. Richie called it an “iron fist in a velvet glove” which seems exactly right to me. It offers candied cherries, blackberries and dark plum, along with cinnamon, cocoa, graphite and a refreshing amount of orange zest. I imagine this will offer a lot of depth while retaining its refinement as it ages.

The star of the lineup was the 2013 Diamond Selection cabernet sauvignon. My first note from the tasting is “that’s a special wine,” followed by “so dynamic, so young.” As Richie said, this will outlive us all. It offers ripe red, black and blue fruits buried deep in an elegant tannic structure balanced by perfect acidity. It also features toasted hazelnuts, blood orange, dark chocolate, and anise. This would be a shame not to try, and an even bigger shame not to age for as long as you can be patient.

This Rombauer line up was superb, but only a fraction of what Richie and his team produce. Much of their wine, including single vineyard wines and a late harvest chardonnay, among others, are available exclusively at the winery and through their wine club. Based on this experience, the limited productions wines are likely worth the trip.

My conclusion after this experience is really quite simple: the wine of Rombauer is so good because the people behind it are obsessively focused on delivering their very best to their customers and they put their all into the effort. As I said above, many wineries speak like this about themselves, but few offer products that are convincing. Rombauer leaves no question.