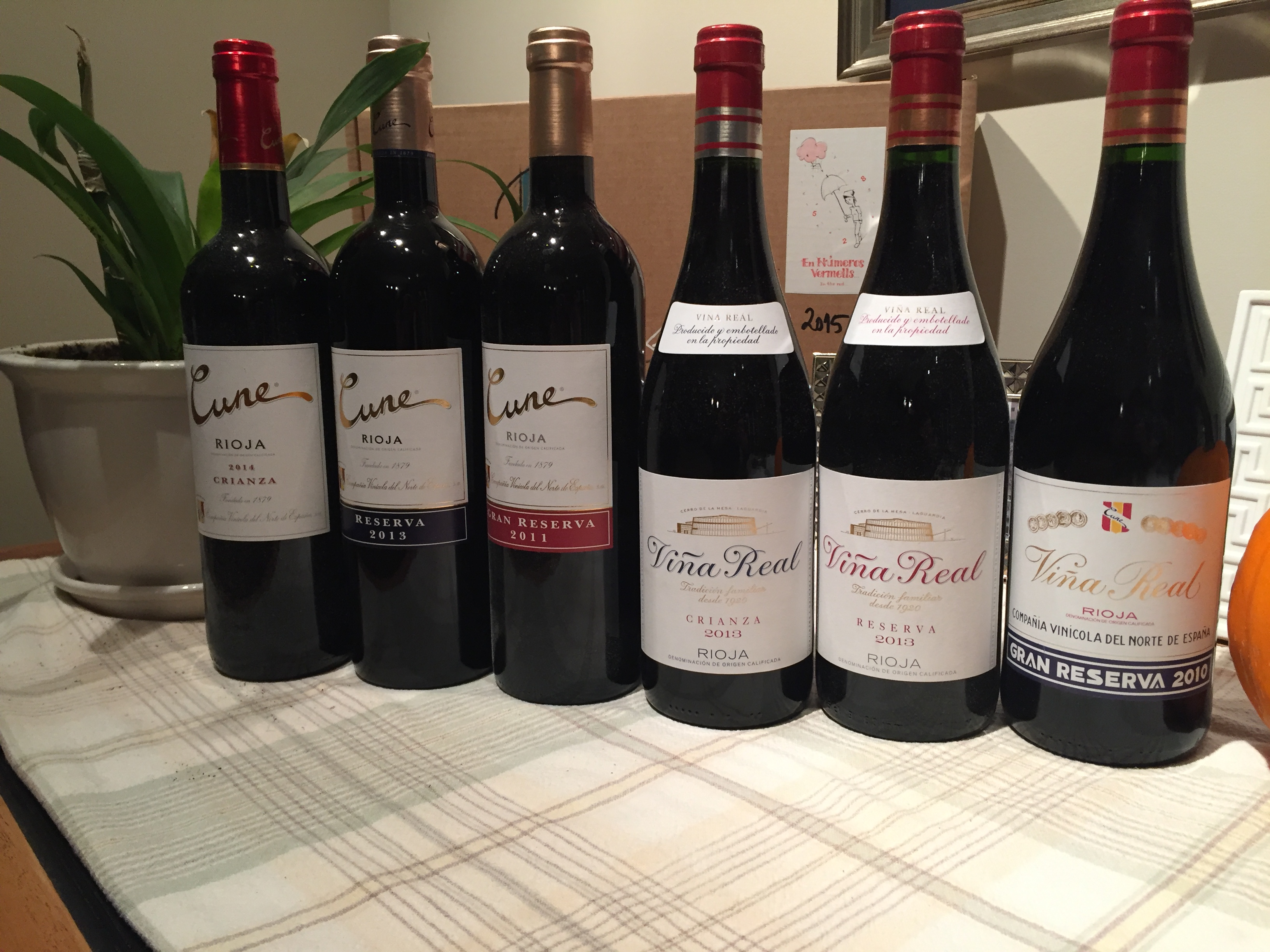 The Wines of CVNE

Rioja is not one of the easier wine regions to master, but it is well worth the effort if one takes time to explore it diligently. I’ve put attention towards Rioja on-and-off for years and have found it both frustrating and rewarding because of the evolution of the region. For centuries, Rioja was aged in American oak and coaxed into wine through long aging and very careful vinification. The approach produces significant complexity that centers around a core of Earth, leather, tobacco, cherries, oak, bright acidity and dense tannin., and creates a wine that benefits from decades of aging. While some producers still follow this method, the traditional approach is becoming rarer as many producers have reacted to the global phenomenon of the more approachable fruit-forward and ripe profile and changed how they make wine. This new style, dubbed “modern Rioja,” is treated differently in the vineyard and winery, and then aged in mellower and sweater French and Hungarian oak barrels, producing a softer, more round and fruity wine that requires significantly less aging to be approachable and rarely offers much of the Earthy characteristic famous to Rioja.

I’ve found myself roundly disappointed with modern Rioja. To be blunt, why go to Rioja for a style of wine that’s available from anywhere in the world? Traditional Rioja, now, that’s something unique to the region. If we want to drink Rioja, presumably it’s because we want its unique characteristics, so this modern thing seems disingenuous to me given Rioja’s centuries of winemaking history that focused, proudly, on the traditional profile until very recently. Though tempranillo remains the core ingredient of both styles, the whims of the vineyard manager and winemaker can churn out vastly different wines and, for consumers like me who prefer the traditional style, that means fewer options.

The differences between traditional and modern Rioja are not, however, binary; there is a range. I’ve had some very good Riojas that fall somewhere between the ends of the continuum. Though Rioja wineries typically don’t self-identify as traditional or modern, I’ve long identified CVNE (or CUNE) in that category of “tweeners” – wines bearing characteristics of both, and have enjoyed their wines. I was recently sent half a case of these wines to sample, and roped some fellow Rioja lovers into tasting them with me. The box included three wines from their CUNE line and three from the Viña Real line so that I could get a sense for what is the majority production of the CVNE portfolio. l’ve identified four important differences regarding the CUNE and Viña Real wines to cover before going into the reviews.

First, let’s tackled the name. CVNE..CUNE…what? For those uninitiated, CVNE produces CUNE wines, and the reason for the difference in spelling isn’t immediately apparent. This is the first question I asked when I had a chance to send questions off to the winery to provide some context for this review. I’m positive they’re tired of answering the question, but I didn’t know it, and why not take the opportunity when you’re speaking to the winery itself to get the real answer? The explanation is funny: though both are pronounced “coo-nay,” CVNE is an acronym that stands for Compañía Vinicola del Norte de España (The Northern Spanish Wine Company), which was established in 1879. The first wines were supposed to be labeled with the initials, but a clerical error turned the “v” into a “u” and since the first wines produced then were those with lesser aging, the name CUNE has been used henceforth for their line of wines meant for early consumption.

Now that the difference has been explained, let’s go right into the second difference. If CUNE wines are for immediate enjoyment, what’s the deal with CVNE’s Viña Real line, the latter of which aren’t sold at much different prices? After all, there are crianza, reserva and gran reserva bottlings for each. It might be what you imagine: quality and approach. Cune’s grapes come from the Rioja Alta, are vinified in stainless steel, aged in American oak and are made in a fashion meant for early consumption. Viña Real is sourced from the more desirable Rioja Alavesa, and made stylistically to benefit from aging. Viña Real consumers are rewarded by giving these bottles 5+ years of aging (I tend to prefer this style of Rioja with 10+ years on it).

And finally, what is the difference between 2017 CVNE and 1879 CVNE? Given the opportunity, I had to ask: “If someone from 1879 tasted the current releases blind, would they recognize them as CVNE? Would they even recognize them as wines from Rioja? Describe the evolution of the region and the winery.” I loved the thorough response, which I’m going to post nearly verbatim (with some grammatical editing for clarity) and in its entirety :

“Wow hard to respond. First, I think someone from 140 years ago, if they saw the vinification they would go crazy: stainless steel tanks?(!). Concrete tanks ?(!). However, as they moved into the winery they would find comfort – oak barrel aging, bottle aging, stone cellars – the same now as then.

“Regarding the style of wines, the grapes are the same, though they probably didn’t use as strong quality controls in 1879 to put together the blends. It was probably more random. Also, until the 1970s, the vineyards were planted 40% tempranillo, 40% garnacha and 20% the rest. However, starting in the 1970s tempranillo became the favored grape and vineyard plantings started changing. Now, it’s 70% tempranillo, 11% garnacha and 7% viura [these are the main varietals planted].

“Barrel aging has also changed, though CVNE has always used American oak. In our case up to the 1970s, 1980s, wines were aged closer to 6 years. Now, it’s reduced to 2 or 3 years. This puts the wines into the market earlier, and it’s probably that the first years of the wines taste significantly different now than before. 140 years ago they were much oakier upon release than they are today. However, as time goes on they evolve to become very similar.

“As a conclusion, a person familiar with CVNE in 1879 would recognize our wines today as Rioja, and they would recognize that the grapes and soils have not changed because the terroir was and remains the essence of our wines.”

On to the wines. Traditional and tweener Rioja offer very food-friendly acid and balance, and we enjoyed these over a long dinner featuring classic Spanish dishes and flavors. Like many Rioja, CVNE’s wines represent great values and, especially with the Viña Real wines, great upside for the patient collector.

2014 CUNE Crianza – Though initially musty on the nose, time reveals a very ruby, ripe nose of cherries, huckleberries and general Earthiness. The body is medium in stature with precisely balanced acid. The strawberries, cherries and salmon berries are sweet, while smoke and fresh leather feature on the mid palate. The finish is a bit short, but overall it’s a very pleasant wine whose best feature is its seamless balance. 87 points. Value: B+

2013 Viña Real Crianza – The nose is deeper than the CUNE Crianza and dominated by oak at this early stage, offering toast, must, cocoa, cherries, moist Earth and Evergreen. The body features slightly grippy tannins and bright acid that comes through as slightly bitter orange peel and parsley notes. The slightly tart strawberries and cranberries are very bright, and supported by tanned leather. This has good depth and complexity and more regional typicity than the CUNE. It will begin to really emerge in two or three years. 89 points at the moment. Value: A

2013 CUNE Reserva – The nose boasts lovely huckleberries, crushed blackberries, cherries, hickory smoke and some hedonistic leather. It’s fuller bodied than either Crianza with bright, deep acidity. Though well-balanced, full integration of tannin, acid and alcohol will require some time. The fruits are strawberries and cherries, it offers black pepper, reserved leather and orange zest, the latter of which lifts the mid palate. It’s quite enjoyable now and drinking surprisingly well for its young age, I think this one ideally gets at least 3-5 years of cellaring. 90 points right now. Value: B

2013 Viña Real Reserva – Very deep aromas of toast and wet underbrush centered around concentrated brambleberry and blackberry. The body indicates just how young this wine is. Medium-plus in stature, the tannins are thick grained and very layered. The typicity is readily apparent here: tanned leather, bitter espresso, tart cherries, dried parsley and cumin. This one is quite nice, but with another 5-7 years of aging it will really reward, though it has the stuffing to improve over 10+ years. 92 points, but higher in the future. Value: B+

2011 CUNE Gran Reserva – Secondary aromas come through on the nose. There is coconut, smoke, blueberry and strawberries, though there is also clearly more awaiting their birth. The body is gorgeous in texture, ripe and round, though the harmonious acid and tannin are very much present. The balance of this wine is expert. The flavors include plum, strawberry, coconut, leather, tobacco leaf and Blood Orange juice. Very appealing now, with 5-10 years it’s going to be spectacular. 92 points with room for improvement. Value: B+

2010 Viña Real Gran Reserva – Dark, brooding and lush nose of crushed black and blue fruit, with big sea mist, hickory smoke, tanned tobacco and a nice spearmint kick. The full body offers dense tannins and bright acid. There are big hits of saline, leather and tobacco that lead delivery of red plum, huckleberry, strawberry, salmon berry and raspberry. When the finish rolls around, it’s bitter greens and salmon jerky. Very, very layered wine that evolves in the glass by the hour, it deserves 10-plus years of aging. 94 points with a ton of upside. Value: A

RINGER ALERT Our host for the dinner opened a bottle of 2010 Imperial Reserva from his cellar. Imperial is CVNE’s finest wine, situated above Viña Real in the portfolio. Undeterred by the infanticide being committed, I plunged into this wonderful wine. The nose is mostly savory at the moment with florals, smoke and red berries. The body was lush and well-integrated, and the layers went on seemingly indefinitely. Flavors delivered included Acai, sweet strawberry, sweet tobacco, pomegranate, Balsamic reduction and seaweed. This really deserves another ten years of aging, minimum, and will improve for at least another twenty.

I thoroughly enjoyed this study of the two lines of CVNE, which I recommend for the Rioja neophyte and well-studied alike because typicity, if slightly reserved, isn’t lost. Further, the values on each of these are good, and great for some, especially when cellar-worthiness is considered. If it’s time in your life for a Rioja exploration, you would do well to grab these six bottles from CUNE and Viña Real, a group of friends and some northern Spanish food. Arriba, abajo, el centro y pa dentro!

2 thoughts on “The Wines of CVNE”