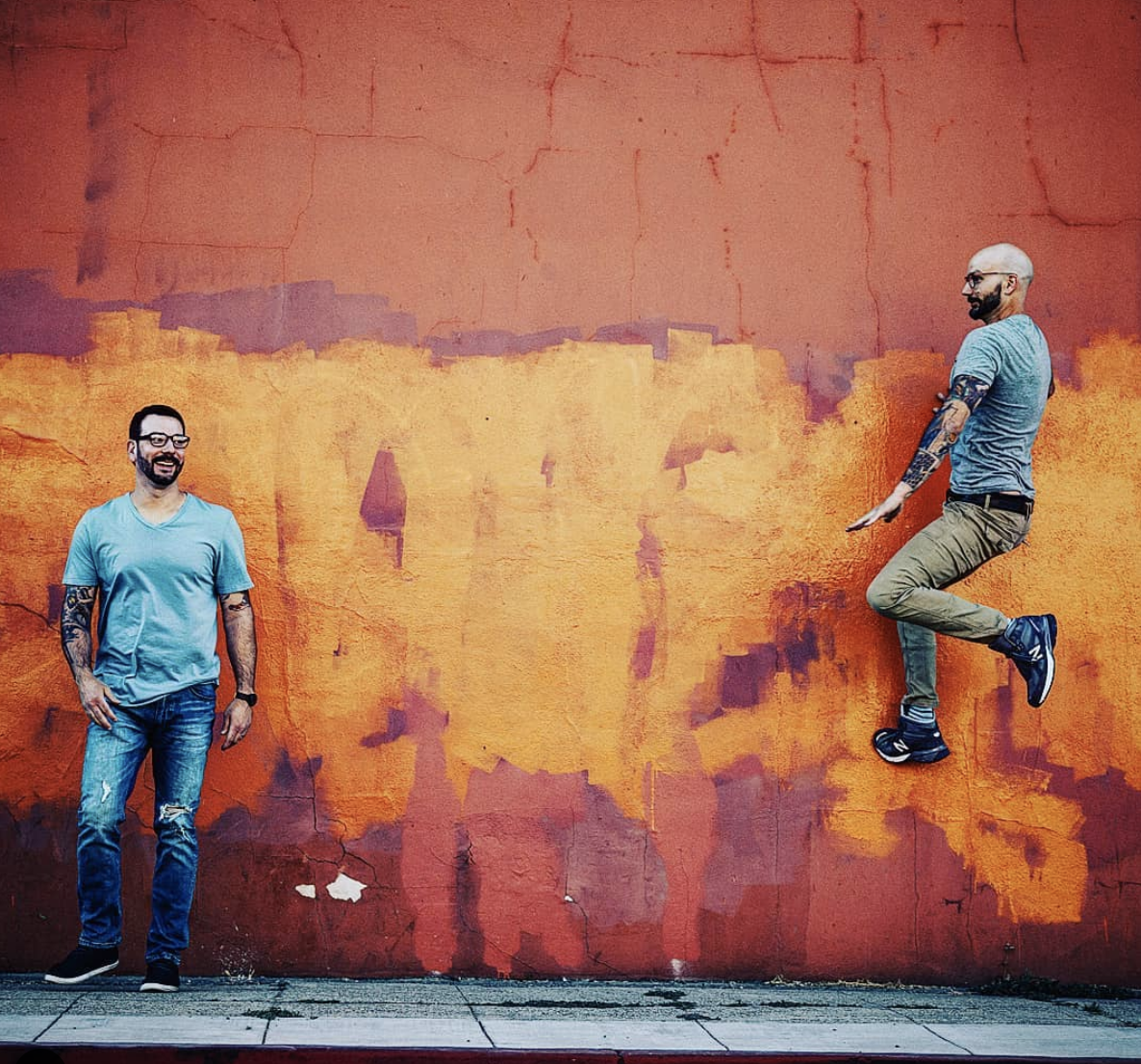 It took real persistence to get this piece written. Not by me, but by Jesse Inman, who is one half of the sibling pair behind Lucky Rock Wine Company. First, he sent me their sauvignon blanc in July 2019, then their pinot noir a few months later. Except, it didn’t arrive, so he had to send another bottle. Then he had to pester me for, like, three months to get the interview scheduled. Finally, nine months after making first contact, we spoke. And the thing is, it’s not like the wine sucked and I didn’t know how to say “no.” I wrote this because, as the title of the post suggests, I want people to try this wine. It’s really good.

I’m neither a true snob nor judgment-free when it comes to wine, but somewhere between depending on the day. I’ll admit to huffing and puffing every time I see someone on Bachelor hold their wine glass by the bulb, yelling “BY THE STEM” at the television while my wife, who for the record agrees, rolls her eyes. And I’m often guilty of talking more about a wine that we’re sharing with friends that they care to hear, sometimes going on diatribes laced with nitpicks of the obviously wrong decision to do malo or the overly-judicious use of new oak on such a delicate grape.

That said, I also get great joy out of making the case against top of the line Bordeaux because the value proposition is garbage. And for the life of me, I cannot wrap my head around the people who rave about some of the most lofted California cult wines, which from my experience offer underwhelming sophistication and are often wildly out of balance (which is okay because they’re built in a way that the balance only gets worse with time).

I’m skipping ahead a bit in the interview with Jesse, but he peppered it with a two lines that explain the above paragraphs:

“Take your ascot off and drink our wine.”

“We’re hoping that [our] quality is good enough that people [who usually pay more] are willing to drink down to it price-wise, but also [people who don’t normally pay our price] drink up to it because it’s so good that it justifies them spending a bit more than usual.”

If the suspense is killing you, here it is: Lucky Rock pinot noir retails for $22, but to my palate it’s better than a lot of $30 and $40 pinots I’ve had. More on the wine later.

Lucky Rock is not trying to be your typical winery. Their Instagram profile describes themselves as “Wine, Tattoo, Food Truck,” and is filled with pictures of tattoos, their pick-axe (say it fast and it sounds like “kick ass”) logo and dudes in beards and trucker hats having fun. One post, featuring a (relatively) close up of the chest of a heavily tattooed woman wearing a Lucky Rock tank top, uses the line “Look! We’re a lifestyle brand that actually knows how to make wine?”

“Our whole model is no pretension and good wine at a good price,” Jesse told me. I’m in the middle of a book on the history of Ralph Lauren, the man and the company. Lauren has been very clear that he is not a fashion designer nor is he selling fashion. Rather, he explains, his clothes are about style within the context of a lifestyle that he wants the people who wear his clothes to experience. I had asked Jesse about their lifestyle approach because in the same way that Ralph Lauren ads are as much about the non-clothing elements of the visuals and language used, Lucky Rock seemed to be about a lifestyle package that includes wine as one of the many elements.

“You can’t just rely on brand [to make it in wine],” Jesse said. “Obviously we make wine, but the tattoo part [of the brand ID] is a parallel for modernizing the wine business. We cuss a lot, we’re covered in tattoos, we joke around, and that’s unusual for quality wine. My brother and I figured that if we’re going to put this amount of effort into it then we have to have fun and be authentic about who we are.”

“The food truck,” he continued, referencing the Instagram profile description, “is that great wine and food go together. But just because you’re eating great food doesn’t mean that you need a white table cloth. [There is a] correlation between food truck and Lucky Rock – French Laundry and Bond are synonymous the same way. We’re not trying to kid ourselves, we’re not Bond, not trying to be that, nor do you want to be. But we know that our wine goes with great food regardless of where the food comes from. There is really fantastic food coming out of trucks, just like we’re trying to make really fantastic wine that comes to you in an unpretentious way.”

I’ll be completely open about my own experience with Lucky Rock. I’d never heard of it until Jesse contacted me, and after looking at the website and Instagram I set myself up for disappointment. The sauvignon blanc was solid, maybe even good, but the pinot noir blew me away. The reality is that Lucky Rock is a legitimate winery that punches above its price point.

They’re able to do that because they take advantage of economies of scale built into their business model. They make a lot of wine for other brands, much of which comes from really good vineyards that are strategically chosen based on their ability to deliver high quality grapes at less than high-end Napa prices. Of the annual haul, a small amount is taken to produce Lucky Rock. By pooling the collective tonnage needs, they’re able to get grapes that a stand-alone winery could not afford to sell at $22 per bottle. Put another way, if they were buying these grapes just for Lucky Rock, the price point would be significantly higher.

Starting from the goal of making a very reasonably priced wine, a few other elements of the business plan are critical to success. They are about 60% wholesale having made the conscious choice to prioritize that over being direct-to-consumer, which lowers overhead. They have to be high volume, as well, because they are low margin. “We want to be different,” Jesse explained, “if we ever opened a traditional tasting room we’d be letting ourselves down. If anything, we might open a tap room featuring different wines and beers to pour alongside our stuff.”

It is also critical to making a high quality $22 pinot that they actually know what they’re doing. Jesse cut his teeth making high quality, more expensive wine at August Briggs Winery, where he got his start thanks to a close family connection and where he continues to make the wine today. While the Lucky Rock lifestyle is more warehouse than Napa Valley, the winemaking is as advanced as those who sell the high society lifestyle. Jesse has been making pinot noir “for my entire winemaking life. We’re taking the high end mentality and finding vineyards where we can apply that approach without going as expensive.”

Jesse and I talked tannins for a solid ten minutes because one of the more impressive aspects of the 2018 pinot was the quality and elegance of the structure. Often times, pinot under $30 falls flat and thin, but not Lucky Rock. He takes tannin structure seriously and has been trying various trade craft over the last several vintages to build a consistent profile. Close relationships with fruit growers, careful use of highly selective tannin additives and lots of experimentation with various barrel cooperages and treatments has led to three consecutive vintages now of positive refinement of the tannin structure. It sounds like he’s getting to a place where achieving consistency will keep the wine at a great place.

Here’s the thing: Lucky Rock’s lifestyle isn’t for everyone, though I do imagine that it is a major factor behind the label’s success thus far. What is for a wider audience, though, is the wine. Lucky Rock’s desire to capture customers based on the quality, whether it’s more or less expensive than you normally pay, delivers in the glass. Even if you aren’t into tattoos, food trucks or trucker hats, even if the label is a bit too aggressive for you, you need to try the wine because, and I feel confident saying this, you won’t find a better pinot noir for the price. And if you dig their vibe, all the better. Dive right in.

Here’s the tasting note on the 2018, which is currently for sale: The nose-filling aromas are dominated by bright cherry and raspberry, but also include subtle tar, rose petal and baking spice. The body is medium plus in weight with fine grained tannin and modest but well-integrated acid. This could age for another 1-2 years and do nicely, but it’s gulpable at the moment. Cherry and raspberry pop on the palate as well, and are bolstered by blood orange, lilac and something spicy. This punches well above its price point. 92 points. Value: A+.

Right now, help the brothers out and order direct. They’re offering a temporary COVID-inspired discount: 15% off 6 bottles with $6 shipping and 20% off 12 bottles with $12 shipping. Discount codes can be found here. They ship to a good chunk of the country.

If you’d rather find it locally, they have a retail finder here.

One thought on “Try this Wine: Killer $22 Pinot”