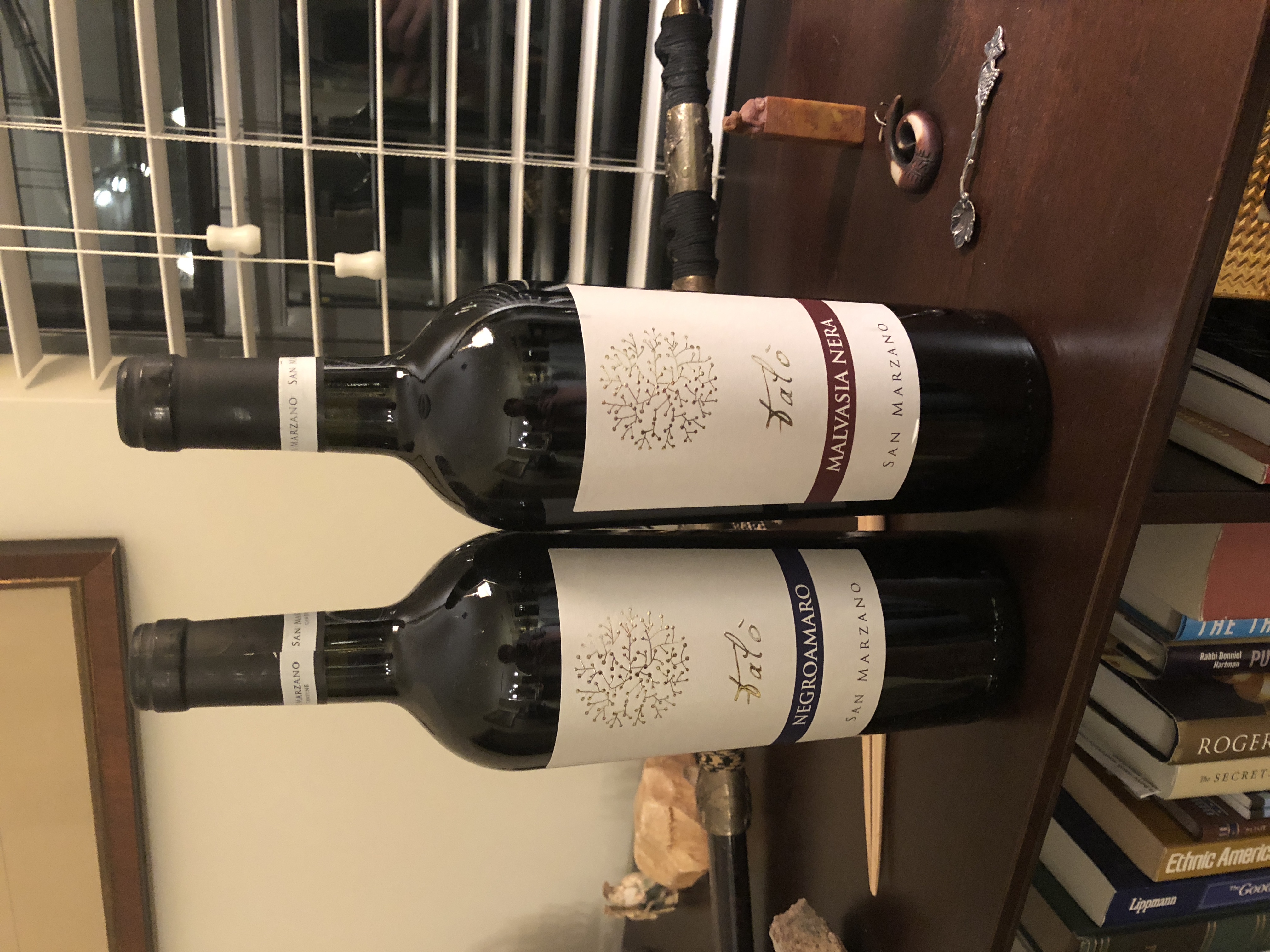 Two Great Wines from the Famous Land of Tomatoes

So it turns out wine from the heel of Italy is pretty good. Specifically, San Marzano wine. I’ll admit to knowing next to nothing about wine from this part of Italy, this part being Puglia. When I hear Puglia, my mind goes back to Mario Batali’s old (and best) Food Network show, Molto Mario. My first culinary love was Italian food, and in my formidable teenage years I learned through the show the concept of what I can call “regionality,” which effectively means that how and what people cook varies by where it’s done. If this sounds a bit like terroir, that’s not far off, although it encompasses a bit more: in addition to how differences in land and climate affect the taste of the ingredients, it also includes methodology traditions, ingredient combinations, religious influences, past conqueror(s) influence, and more. One could make a case that terroir can encompass all of this as well, but I think that goes beyond the spirit of terroir’s focus on non-human elements.

Regardless, when I think of Pulgia and San Marzano, I think about food and the latter’s renowned tomatoes (though don’t let the grocery store packaging fool you). Until now, until these Talo wines. I tasted them over two nights, and had a neighbor over to try them on the second. Not a wino, he asked me to tell him about the wines and I found myself going down the rabbit hole of trying to explain the terroir of certain wines from Southern Italy and Greece, which I flippantly referred to as “Med wines,” a terrible term that doesn’t actually exist outside this world of one because it also applies to wines from, say, Israel, that offer little in similarity. In my mind, Med wines are driven by a peppery spice and loam-driven minerality that I can pick out of any assembly of wines from around the globe. Not having tasted San Marzano wine before, I could’ve called Med wine in a blind tasting but in a million years would never have placed them in the land of the world’s most famous tomatoes.

And what a pleasant surprise, because these are uniquely expressive and approachable wines that bring that “Med wine” edge that I’ve always loved and have never spent enough time getting to know. I’ll be reviewing a trio of whites from Greece in an upcoming post, and these two wines have made me a little more excited to do that. I had a lot of fun with these, reviewing them separately and then going back and forth identifying differences and themes.

On quality and approachability, they are comparable. Both benefit from an hour or so of decanting. Their textures suggest the same warm, dry climate, and they both deliver that peppery-loam energy I noted earlier. Beyond that, we’re talking about distinctly different wines that can still be thoroughly enjoyed by anyone liking either. That is to say, if you get to try one and like it, definitely seek out the other. Or better yet, just get both and drink them together.

The 2015 San Marzano Talo Malvasia Nera, made from the Malvasia grape, is the more fruit forward of the two. It’s dark, brutish nose bursts with bruised cherries, crushed blackberries, blood orange, tar, violet and crushed rocks. The palate is full bodied with saturated grainy tannin that never seem to settle in one place. The juicy, bright acidity keeps the wine from developing a cloying sensation, which is an important counter balance to the sweet fruit that comes in waves of boysenberry, strawberry, blueberry, Acai and bewildering big dose of grapefruit that I could never get over, or stop appreciating. There are streaks of loam, saline and sweet tobacco leaf as well. Overall, it’s a brilliantly unusual package of aromas, flavors and textures. I’m giving it 89 points with a value rating of A.

The 2015 San Marzano Talo Negroamaro, made from the Negroamaro grape which I’m not sure I’ve had previously, is also a real treat and my preference of the two if I’m forced to pick. The fruit is a bit more reserved than the Malvasia Nera, which allows more savoriness to come through. The nose is all about minerality and Earthiness, offering seasoned leather, tar, wet Earth, granite, Evergreen, saline and sour cherry. On the palate, it’s full bodied with lush, juicy acidity that really carries the flavors and round, fine grained tannin that keep things well-framed. The flavors strike an almost-elegant tone. The fruit is sweeter on the palate than the nose, boasting cherry concentrate and huge hits of black and red currants. Dusty mocha, loam, graphite and bright, sweet orange juice come through as well. I suspect this one might improve with a year of aging, but decant it for an hour and it won’t matter. This one deserves 90 points and an A value rating.

Since we’re less than a week out from Thanksgiving, I’ll answer the question: yes, these would work well for your feast. They also work well on their own, and I can imagine them pairing nicely with a big range of foods, even including heartier seafood. At roughly $15 each, they are some of the more interesting and unusual wines you’ll find in that price range. I’ll put it succinctly: there’s good reason to find and try these wines.