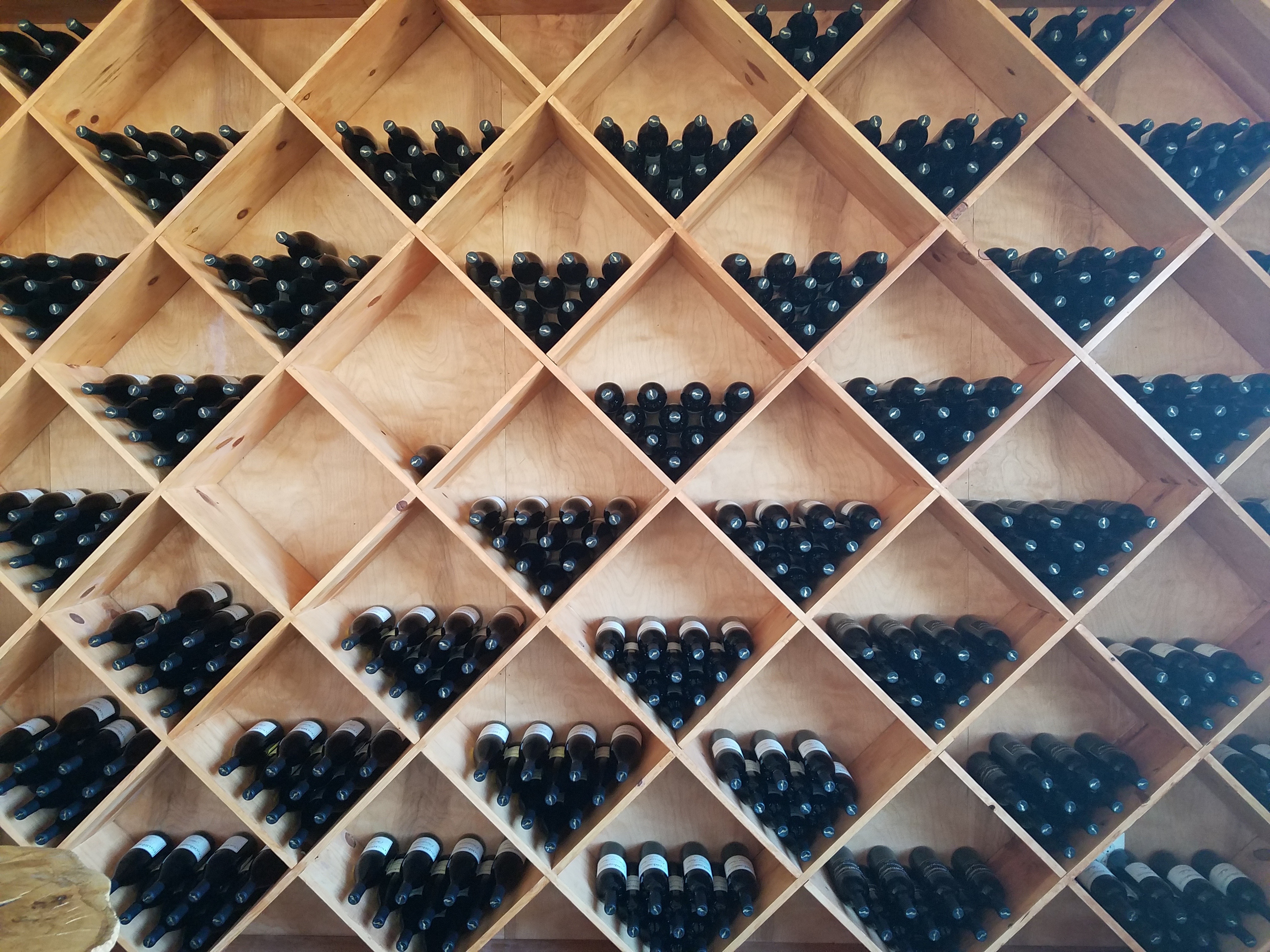 World Class Wine is Made in Maryland

Really good wine can be made from Maryland grapes, that much is clear from visiting Old Westminster Winery. And when the Baker family does it, it can also be really special. Boutique wineries like Old Westminster often strive for a signature or house style that can attract a loyal following to ensure financial stability and a place in wine’s royalty. What seems in vogue these days is a focus on creating wines that are “expressions” of their vineyards or climates and thus the signature is something a little less specific to the winemaker than it is to the grapes and their sources.

Old Westminster does this, sort of, but after you try the wine you get the feeling there’s a loftier goal. Maryland terrior isn’t particularly acclaimed, and while the Bakers passionately aim to change its reputation for the better through smart varietal choises and meticulous vineyard site selection and management, they also aim to make the best wine they can with those grapes using a wide variety of vineyard management and winemaking techniques carefully chosen to coax the best wine from the grapes. The end results are wines that, if tasted blind, would likely be assumed to be from elsewhere while standing out for their quality and unique profiles. If another dozen or two wineries join Old Westminster and the other vanguard Maryland winery Black Ankle then perhaps Maryland’s terrior would gain enough attention to be recognizable. Given the newness of serious Maryland wine and the climatic challenges of the mid-Atlantic, the Baker’s wines are, at least to me, especially impressive because of where they are raised.

Drew Baker, one of the three siblings behind Old Westminster, met me on a Tuesday afternoon at their beautiful one-year old tasting room and over a low key tasting of eight wines introduced me to the Baker family’s approach to producing top shelf wine, which begins with smart site selection. The Baker’s estate vineyard sits on the mid-Maryland ridge on the Piedmont Plateau at an elevation of about 800 feet while its others sources are along the ­­­­­­­western foothills of South Mountain and range in elevation between 750 and 1000 feet. The family is expanding their own  vineyards into other areas as they invest significantly in finding the best sites. The family recently purchased the 117-acre Burnt Hill Farm on Piedmont Plateau after a long search in partnership with a renowned geologist. Drew is utterly jazzed about this new project.

The Bakers are also taking advantage of the land around the winery, where they harvest some of the fruit used in the wine they’re currently selling, to experiment with new varietals. For example, in the vineyard across from the tasting room is a small planting of chardonel, a late ripening hybrid of the vitis vinifera chardonnay and the hybrid seyval blanc created in New York that can develop decent brix along with good acidity while still weathering colder climates. Though Old Westminster hasn’t committed to selling any wine made from the grape, Drew is excited to experiment with it next year when he’s able to harvest it for the first time.

The Baker family’s influences are significant. Between the siblings the family worked multiple vintages in Argentina (Ashli at a Micheal Rouland winery), New Zealand (Drew with Morton Estate) and California (Lisa with Patz & Hall and Bredrock Wine Company) in preparation for starting their own winery. The experience has paid off not only for what they learned about making good wine, but for what they learned about the kind of wines they wanted to make as well. Their wines aren’t an effort to replicate those of any of the wineries where they worked.

In the winery the Bakers are quite specific as well. Drew talked at length about taking only whole berries to tank and their meticulous efforts to ensure broken skins get removed. They use gravity to move must and ferment with native yeasts, and often times blend different press cuts to assemble wines that bear the characteristics the family is looking for in each wine. If you’re reading between the lines, you’re realizing that they spend a lot of time making their wine as these are not insignificant efforts.

The result is truly a Old Westminster house style: it has a set of particularities that combine the vineyards’ terrior and the Old Westminster processes to produce something unique. The whites showed consistently highly levels of acid that melded with ripe, round fruits and skin tannins to produce medium bodied beauties. With the reds I found myself noting meatiness and dark cherries across the range, each with nice concentration and enough acid to make the wines shine with food. Perhaps Old Westminster’s most impressive wines are their pétillant-naturel sparklers. It’s hard to be more wine geek than that these days. Every wine shows precision and cleanliness without losing personality.

Drew Baker (L) and the author

My tasting notes and scores are below. The pet-nats, cabernet franc and malbec were standouts. Old Westminster makes a large variety of wines, and if the pet-nat made from albarino is any indication then the still version, which I wasn’t able to try, is likely a shining example of why it may be a leading contender for Maryland’s best white varietal. I highly recommend a visit to Old Westminster and the customizable wine club, which I’ve joined since the visit. Their wines can be purchased at the winery and through their website.

2015 Pét-Nat Albariño: First of its kind made in mid-Atlantic. Picked early at 3.0 pH and 19 brix (highly acidic). Very bright and fresh. A bit reductive at first but with a few minutes it begins to sing. Honeyed citrus on the nose. Really fun cocktail fruit/tutti fruiti aromas along with celery. Wonderful straw flavor notes along with strawberries, celery and mandarin oranges. Bit of baking spice. Incredibly executed vision, I imagine it would be great after a 20-30 minute decant. 93 points. Value: A

2015 Pét-Nat Gruner Veltiner: Like the Pet- Nat Albariño this was picked early September (especially unusual for the later ripening grape) and, also like the Albariño bottled at a density of 2 atmospheres of pressure, a full two-thirds less than the average Champagne. Aromas of honeysuckle, orange zest and white pepper. The palate is bigger and rounder than the Albariño and more fleshy and oily. Underripe oranges, big acid zip. Grassy notes along with artichoke. Would benefit from a 30-60 minute decant. 91 points. Value: A-

NV Greenstone White Third Edition: a multivintage of 2014 and 2015 it hasn’t been released yet. Blend of two-thirds viognier and one-third sauvignon blanc. The nose is initially a little skunky but it burns off quickly; by the time it’s released it may disappear. There are big pineapple and honey notes that do, thankfully stick around. Also a bit flinty. The palate is bigger than expected but the sauvignon blanc’s acidity keeps it from putting on too much weight.  Tropical with fresh pasture flavors and a big dose of white pepper. 89 points. Value: TBD

2015 Cool Ridge Viognier: aged entirely in stainless and aged sur lie. The nose is tropical and has a big dose of vanilla that comes, impressively, entirely from the fruit. With a bit more air it takes on a marshmallow note. It’s medium bodied and driven by streaky acid that I really appreciate. There’s a nice chili flake kick along with pound cake and mango flavors. This is leaner and acidic viognier and I prefer that style to the bigger and buttery California and Condrieu profiles. 89 points. Value: B+

2014 Antietam Creek Vineyard Cabernet Franc: extremely aromatic, this slams itself into your nose with huge density. Smoked meat with peppered beef jerky kick things off and intense glass swirling brings out gorgeous boysenberries. It’s medium bodied in the mouth and comes off quite fresh and clean. The acid is robust and the fruit just a little sweet, but it is far from cloying. Big black pepper and cherries along with flavors of tar, smoke and iodine. There’s just a touch of greenness in the background that I imagine will integrate with another year or two of bottle age. This is an unusual cabernet franc, neither what you’d in Chinon or California, it’s a savory delight. 93 points. Value: A

2013 Channery Hill: a blend of 85% merlot and 15% cabernet sauvignon. The nose is driven by meatiness and cherries but also has whiffs of crushed bedrock stones and smoke. There’s just a hint of mocha. In the mouth it’s fairly lightweight but has a good dose of grainy tannins that establish its presence. Classic merlot flavors of cherries, smoke and coca while the cabernet sauvignon adds sweet mint and tar. A nice sipper that I can see evolving over a few hours. 88 points. Value: B

NV Revelry Second Edition: 32% cabernet franc, 32% blaufränkisch, 16% merlot, 14% syrah and 4% cabernet sauvignon. Includes some free run and bled juice. The nose is again meaty with bright cherries, it also features cranberries. The palate is a bit heavier but its bright acidity and skin tannins keep it dancing. The fruit is dark and includes blackberries, cherries and plus. There is also some nice vegetal and black pepper flavors. With some air it takes on a really nice hickory barbecue sauce note. I imagine this would be a very versatile food and cheese wine. 90 points. Value: A-

2014 South Mountain Malbec: more than any grape I’ve experienced malbec reflects its terrior and this one is no different. It wafts sweet smokiness, cherries, raspberries, thyme and tar in a gorgeous bouquet. The palate is medium bodied and offers a delightful duo of fruit and acidity that balance out nicely with the still-softening tannins. The texture is fantastic. Fruit is red and sweet and plays off the black pepper note nicely. As it takes on air pomegranate flavors and astringency show up. 93 points now but with another few years it’ll be even better. Value: A

2 thoughts on “World Class Wine is Made in Maryland”