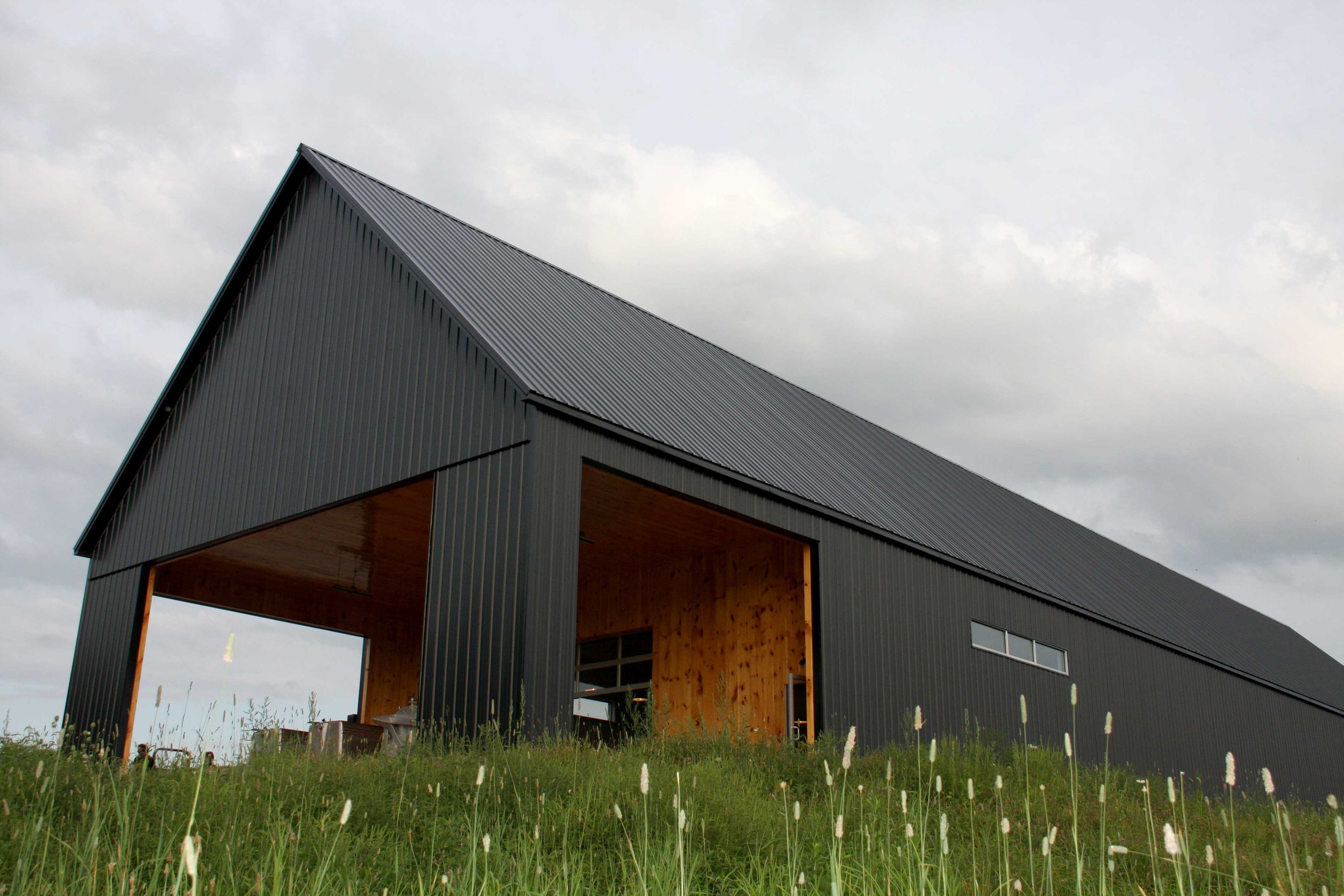 Forge Cellars and the Terroir of the Finger Lakes

We were told that the majority of negative feedback they receive at Forge is about their the lack of signage. They’re not hard to find, it’s stupid. And the absence of location pointers helps keep unseasoned and uninformed tourists (read: annoying and disrespectful porch pounders (no offense)) from stumbling onto the incredibly cool facility and turning the place into a tourist trap and bachelorette destination, and ruining it for the rest of us. So, thankfully, no signs.

The first thing you notice when you arrive at Forge is the view:

And then you’re likely to walk to the front of the building, noticing this:

Turning, then, to see this:

Then Rick Rainey greets you. No pretense, no bullshit, just a huge commitment to finding the best vineyard sites, working with his partner Louis Barroul of Cheateau de Saint Cosme to make stellar riesling and pinot noir, intelligently designing and building a winery, giving back and adding substance to the region, and treating his guests to very fun tastings. Tastings require a reservation, and Rick does them very purposefully: everyone sits at the same table with each other, and the group has one conversation. This includes any media types, even the big ones, industry people, winemakers – everyone. They taste with the rest of us. It’s a tasting for wine people, and Rick makes no distinctions after that.

I was first introduced to Forge by my friend Drew Baker of Old Westminster Winery in Maryland (another self-professed soil geek like Rick), who brought a bottle of Forge’s Classique riesling to a wine dinner. Later, on the strength of that bottle, when I collected bottles for the Good Vitis Grand America Riesling Tasting, I emailed Forge soliciting contributions. Rick ended up responding after the tasting, and apologized for not getting to the email sooner. When we sat down with him months later, he told me that he rarely bothers to send out samples, especially to people who haven’t already visited. “Get on a plane or in your car and come out here. You can’t adequately appreciate wine without meeting the people, experiencing the land and spending time in the winery.” I heard the message: you were never getting samples. “But now that we know each other, who knows, I might be open to it.” Again, the message: we’re cool now.

Rick leading us down the rabbit hole of Finger Lakes riesling

Rick facilitated an amazing tasting with a group of 9 of us who didn’t know each other. Across the table were a couple from Connecticut. Next to them was a man, who had Finger Lakes orchards for decades but had recently converted them to wine grapes, and his wife. Wrapping around the far end was a group of three, and then my friend and I set next to Rick. We were there for three hours, and once we went through the line up Rick pushed the open bottles towards the center of the table and asked people to hang out and help finish them (it was 7pm on a Friday – get home time – so he had to have been having a good time). The conversation was high level, geeky, friendly and collegial, and lubricated by Forge’s wine and Rick’s entertaining stories and anecdotes.

Forge goes for about as simple a winemaking approach as they can, but they don’t advertise it, and they certainly don’t boast about it. They use seriously neutral oak (8-10 years old, usually), with many barrels coming in the 500 and 600 liter sizes. All the barrels are sourced from France by Barroul. Sulfur is quite minimal and other additives are eschewed. Rick is the vineyard guy. They’ve recently planted 8 new acres by the winery with a high density of around 2,100 vines per acre. They also source from 13 or 14 other spots near the winery. Residual sugar in the rieslings are kept low, usually no more than 2-3 grams per liter (though they taste bone dry), and the pinots are made largely from Pommard clones.

A recent barrel shipment from Cosme

To Rick’s credit, he was right about his samples point: they’re doing something special at Forge and the experience of being there drives it home. Rick spoke several times about their commitment to the region, and within the region finding the best sites for the kind of wines they want to produce. But that’s typical winery speak. It was everything else that followed that made it clear how Forge is really about the region. He talked at length about the people of the Finger Lakes, its economic history and the role a revitalizing wine industry is playing in helping some of the poorest counties in New York State stay afloat while bringing smart people to the area who are dedicated to helping it succeed and expanding what it has to offer its residents and visitors. Our fellow taster who owned vineyards added his own thoughts on this, largely driving the argument that the wine industry was bringing jobs and smart people to the region, all for the better.

Forge wines don’t just represent what Rick does in the Vineyard and Barroul does in the winery, they also reflect the trials and tribulations of the region and its businesses, families and individuals who are its fabric. The Finger Lakes and Central New York, which has an important place in my heart from the time I spent there for graduate school, has a long history of tough times and tough people. These are estimably down-to-Earth types with an almost spiritual commitment to harmonizing with their land, an unforgiving land whose climate toughens the skin and head and rewards those who treat it with respect. As cheesy as it sounds, Forge’s wines have a little something extra, and I don’t think it’s unreasonable to suggest that its terroir includes these more human elements.

The first wine that Rick poured was the 2015 Classique riesling, which is a blend of multiple vineyards meant to be their gateway bottle and the one distributed most widely. At $19, it is an exceptional riesling and a great entry to the Forge lineup, offering notes of apricot, nectarine, Spanish almond, parsley and lime zest. The body was polished and lush, but offered balanced acidity.

The 2015 Leidenfrost Vineyard Dry Riesling is a step up at $24. The mineral-driven palate boasts flavors that are wild when put together in a riesling, boasting orange zest, raspberry, saline and apricot, finishing with a kick of smoked white pepper.

Sniffed blind, I would’ve called the 2015 Lower Caywood Vineyard Dry Riesling a chenin blanc from Savennieres. The palate offered a big glycerin sensation (not unlike some Savennieres, either) with big stone fruits and deep, deep minerality driving serious depth.

Next was the 2015 Sawmill Creek Vineyard, which was very ripe and dense. Rick believes it’s the most ageworthy riesling in the program from the vintage, and was best able to handle the larger barrels. The nose is powerful, almost sweet, while the palate offers a big structure and a nice amount of red fruits, which is a wonderful discovery in this varietal. The Sawmill is a bit of a fist in a velvet glove kind of wine, and I really liked it.

The best riesling, however, was the 2014 Les Allies. Big on fennel and bitter greens, sharp citrus and Devil’s Club with sneaky slate and flint streaks adding depth. Though savory elements drive the wine, it’s balanced by big hits of fresh apricot and peach on the finish. This is going to go through some cool short-term evolution in the cellar, and was my favorite riesling of the day.

We then moved on to the 2016 rose of pinot noir, which was a minuscule production of 85 cases. The wine saw 16 hours of skin contact, so this is no small animal. The nose is big on crushed berries, and the palate has a real captivating presence and density. It’s a sizable rose, but not heavy. The texture and weight are the real selling points on this one, and I’m told it sells out very quickly.

The penultimate wine was the 2015 Classique pinot noir that, like the Classique riesling, is meant to be an entry pinot. It goes far beyond entry, with a brilliant, high toned classic pinot nose of red fruits and baking spices. On the palate it’s more savory, herbaceous and spicy with a small dose of baking spice on the back end. Burgundian in style, it delivers great finesse and bright acid. A very impressive pinot for the price.

We finished with the 2014 Les Allies pinot noir. My oh my. These vines are planted in shale. The nose is dirty and fungal, and the fruit is dark. The palate boasts big minerals and a nice dose of smoke. The fruit is dark here as well, and it’s just ever so slightly toasty. There’s a fungal streak, but overall this is a mineral-driven wine for those with patience. My closing note was “very good.”

The entire experience at Forge was impressive, from the views at the winery, to the winery itself, to the way the wines capture the region, to the people and, I think above all else, to the seamlessness with which the effort meshes with its home in the Finger Lakes. Forge is Finger Lakes in a bottle, capturing its toughness, its beauty and its tranquility. I went into the visit with nothing other than a taste of one of their wines a year or two ago and Rick’s lackluster email habits shaping my expectations, and came away with the notion that Forge is among the most exciting wineries I’ve come across in America, even though they purposefully remain hard to find and generally eschew the spotlight. I also came away with a case of their wine and a desire to visit again next year when I assuredly will need more.