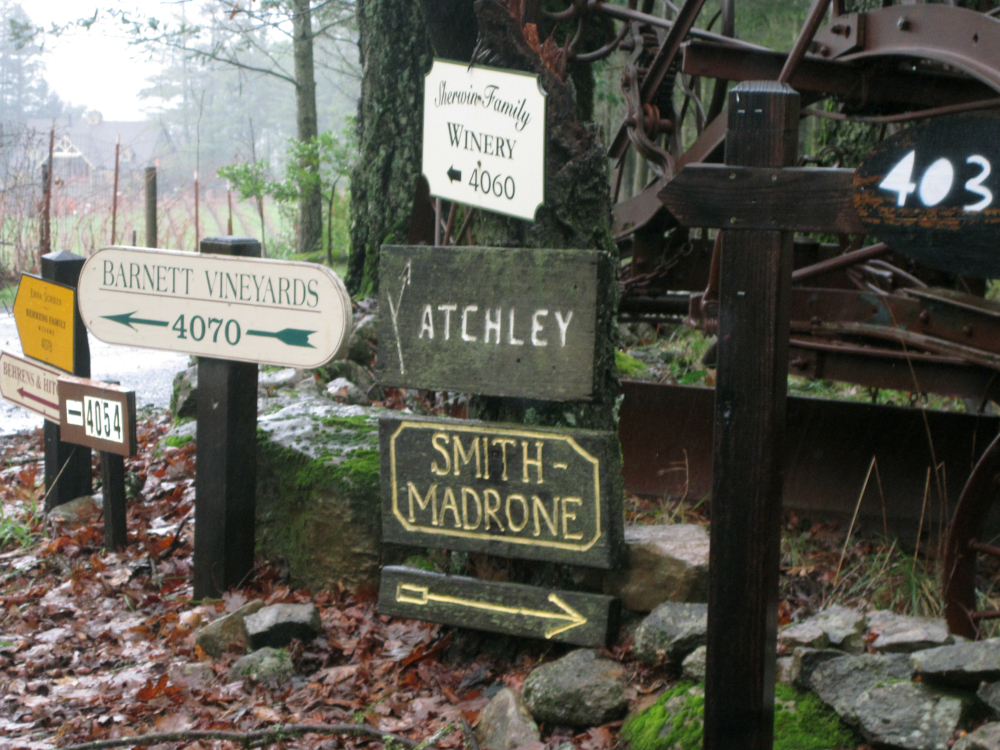 Welcome to 2020! Our first Try this Wine piece, posted back on July 1, 2018, featured one of our favorite white wines here at Good Vitis, Smith-Madrone’s Napa Valley riesling, which is produced entirely from the winery’s estate vineyards on Spring Mountain. Today, we’re writing about the winery’s 2015 estate cabernet sauvignon. Clearly, we have a bit of a fixation with the winery, and we think it’s for good reason; the wine is excellent and excellently priced.

Stu Smith, one of the three Smith family men working the property and making the wine, has many opinions. One of them is that riesling is a great grape for making wine. Another is that what he and other like-minded producers call “mountain wine” is superior to other wine. By “mountain wine,” Stu means wine made from grapes grown on mountain slopes.

The steeper slopes, elevation and orientation of mountain side vineyards offer particular perks that vineyards planted on flatter ground do not. I’ve written about this before in a piece on merlot. In brief, you get better drainage and more radiant energy than flat land vineyards, which drives flavor concentration and skin development while aiding ripening. While that’s too brief to do the argument justice, it’s not really the point of this post, and, plus, the proof is in the bottle. It’s one reason why you should try this wine; tasting is believing.

Smith-Madrone cabernet sauvignon is priced around $45-65 depending on where you find it, which means for the quality it’s an absolute steal in the Napa cabernet category. I’ve not had another Napa cabernet as good for less than $75, while many of the $100+ bottles don’t match its complexity or elegance.

I’ve been a fan of the 2014 vintage of the cabernet, which is still available on shelves. I tasted the 2015 for the first time about two weeks ago and was blown away. I reached out to Stu to talk about it briefly, and he described the 2015 as “a clean, pure expression of mountain cabernet.” I found it to be a substantive wine layered with complexity, but far from heavy or thick. The tannins are ever-present but refined and encourage the flavors rather than extinguish them, a productive feature not found in abundance in Napa. It offers immediate appeal with several hours of decanting and is really impressive on the second night.

This experience with the 2015 is a bit different from the 2014, which as Stu wanted to point out highlights the purpose of Smith-Madrone’s approach to making wine. “2014 was a relatively big vintage. 2015 was on the smaller side. Alcohol is on the low end, and it has good acidity and bright cabernet fruit. 2014 is a bit more lush, fuller, richer. They’re two different styles of wine, and in some ways they show together what we’re trying to do, which is to get the vintage into the glass of wine and not pound a round peg into a square hole. The reason we vintage date [our wines] is to celebrate the diversity of the vintage. It’s a real value to the consumer.”

Decanted this for an hour and as it revealed itself, it became the best vintage of this wine that I’ve had. The nose is a mountain slope of dark sweet cherry and strawberry, wet barky soil, Herbes de Provence, licorice, molasses, black olive and smoke. It is medium plus in weight with elegant and refined tannin and acute acid that combine to form a traditional Old World style structure. The flavors are layered and extended aging will reveal them all. Right now they include salty cherry, strawberry, plum and rhubarb fruit that cohabitate nicely with olive tapenade, black pepper, rose water and graphite. I’d sit on this for at least another five years and then enjoy through 2030. 94 points. Value: A.

This is a wine to try because of the quality, value and intrigue it offers as an elegant, Old World-style wine with a mountain slope twist that drinks well now and will drink well into the future.

You can buy direct from Smith-Madrone, where it is being sold for $52, and also from: