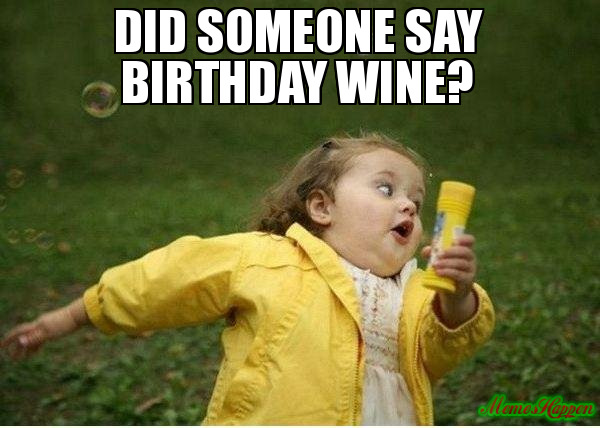 When is Wine Conceived?

On July 11th, I celebrated my 35th birthday with a birthyear 1983 Chateau de Beaucastel Chateauneuf de Pape, one of my favorite French estates. Though it drank well and was special because of its vintage, it would have probably shown its best, not unlike myself, ten or so years ago. As an unreasonable comparison, the 1995 Seven Hills Klipsun merlot from Washington State we drank later that evening was more prime-like. Over the wine and grilled lamb chops, my fiancé and I debated what was actually older: myself or the birthyear wine? My birthdate is July 11th, 1983, but what was the actual birthdate of the Beaucastel?

The question can be put another way: when does wine become wine? I certainly had my theories, as did Kayce. One potential answer is the day fermentation begins because wine is alcoholic, and we couldn’t consider pressed grape juice to be wine, right? I’ve never heard someone make the argument Welch’s grape juice is wine.

My fiancé hypothesized that a wine’s birthday is the day no more additives or methods are introduced because that is the point at which it receives no more human nurturing and stands, if you will, on its own legs (get it?). Prior to that, the required human support means it is not matured yet into wine. For a wine that goes into barrel and then bottle without any additions or further manipulation (even racking), its birthday is the day it is put into barrel. If a wine receives a hit of sulfur prior to bottling, then bottling is its birthday.

Neither of us was able to convince the other, and it became clear Kayce and I weren’t going to settle the debate. So, I decided to put the question to a few winemakers. The breadth of responses were akin to a joke we Jews make about ourselves: two Jews, three opinions. That is to say, no consensus (so thanks, winemakers, for your “help”). Below are the responses, which I found very entertaining to read. I hope you do too.

If readers have their own opinions, I’m on board with doing a subsequent piece featuring thoughtful reader responses if a sufficient number are received. Please email them to goodvitis (at) gmail (dot) com.

Charlie Smith of Smith-Madrone Winery on Spring Mountain in Napa wrote, effectively, that wine is born when fermentation ends:

“The  consensus opinion, of course, is that the year the grapes are picked is the year that the wine is born. It’s always seemed to me, though, that within that year the day that the last yeast cell stops converting sugar to alcohol [is the birthdate]. Or, to put it another way, the day the primary fermentation ceases, is the first day in the life of the wine. It is the first day grape juice is fully, finally converted to wine and day-one in the life of the wine. It becomes ‘finished’ wine on the day it is bottled, but as wine, it was born days, weeks, even years, before.”

Adam Lee of Siduri Wines and Clarice Wine Company in California had, as is wonderfully typical of Adam, a philosopher’s answer:

“I’ve been on a Julian Barnes kick lately, re-reading many of his works, and I came across this quote in The Sense of an Ending: ‘Someone once said that his favorite times in history were when things were collapsing, because that meant something new was being born.’ I thought of this quote when you described a somewhat too old birth-year wine and asked when is a wine actually born.

“A wine dies most often when the cork is popped, or the cap is unscrewed and the wine drunk. I have participated in a wine’s death in joy with friends, and killed an entire bottle myself in sadness and depression. The occasions change, and I interact differently with them each time and with every bottle. And yet every time, wine remains a constant for me in all of life’s moments. As someone who makes wine, the death of those bottles inspires me every year to take what nature provides and birth that into wine. For me, the wine is born in my mind and in my memory’s museums (thanks Kanye) before a new season’s grape is ever grown.”

Mattieu Finot of King Family Vineyards in Virginia not only answered the birthday question, but outlined a wine’s lifespan:

“Malolactic fermentation is like losing your baby teeth in that it doesn’t really change who you are because you’re human already.  Receiving an ‘addition’ [e.g. sulfur] is like having braces because it is optional and doesn’t say anything about whether you’re human (or wine) or not; not everybody needs them and at the end this is just esthetic.

“Once the wine is bottled this is when the wine is an adult and it can take care of itself. Wisdom comes with age…. not when you are 20…. still crazy, strong and all over the place! But, when you get too old, you are losing your muscle and sometimes forget things… a little less substance, even if you were a strong brilliant person!”

Fellow Jew, Garry Cohen of Maryland’s Mazzaroth Vineyard, called it a “nice question” and included a bit of spirituality in his answer:

“I maintain that it’s wine once the fermentation has finished. From then on, it will always be changing. Whether through the use of oak, ml, additives, aging, etc. But at the risk of being a bit spiritual, once it’s finished fermenting and you can do a blessing over it, then it is born.”

Barboursville’s Luca Paschina in Virginia answered, mostly, with a story and a wicked curveball:

“When is a wine birthed? What an interesting question it is. Well, let me tell you what happened earlier this year. The daughter of very dear friends, which we have not seen in a while, came to our house for dinner. Since her parents have hosted us at their home several times with great food and wines, I decide to serve her a wine from her birth year, 1990.

“I searched in my cellar, which is predominantly occupied by Barboursville Vineyards wines, Barolo and Barbaresco, but could not find any good ones from 1990. After initial disappointment, suddenly I realized that since she was born in March of 1990, she was conceived/born in summer of 1989 and happily I reached for a 1989 Barolo which, by the way, was one of the most fantastic growing season of the past 40 years in Piedmont. The wine was beautiful, meaningful  and truly appreciated by all of us.

“Therefore, when is a wine born? Perhaps the Beaucastel was born at bud break on April 8th 1983.”

Not far up the road from Barboursville, Ben Jordan of Early Mountain, began with an analogy:

“For me the best analogue is when the fruit is cut from the vine. Before that the flowers are fertilized, the fruit is formed and develops with a connection to the plant, and the time on the vine is basically gestation. Like birth, harvest is a dramatic change, because the fruit will never be connected to the vine again, and it begins the (hopefully slow) march through life to death. If the vineyard is well cared for, then the point that the grapes hit the picking container marks the point when the microbiome can begin to transform the fruit into wine. This is its birthday.

“Like a newborn, the wine grapes are most fragile right when picked and the winemaker/parents must work attentively, focus on little else, and spend every day (and night) with the newly forming wine. It is the decisions and approach during this short but critical time, along with the fruit’s genetic makeup, that will determine the personality of the wine.

“Fermentation is the childhood. Early on it is almost unbearably charming as the wine is rapidly changing into something more recognizable, becoming more stable, yet still vulnerable and needing of constant attention. The wines emerges from fermentation as the awkward teenager. No one really loves them, except their winemakers, and some days even they are not so sure.

“After that, the wine must grow up, and there is less and less the winemaker/parent can do. They can intervene, yes, but it becomes harder and harder to effect change in a positive way. Once the wine is bottled, it leaves the house, there is not much else winemakers can do other than hope that it will go out into the world and make them proud.

“As a note: If we are trying to make this analogy only with the plant and fruit (and not wine), I would still say that birth begins when the fruit falls or is plucked from the vine. At that point the offspring is no longer connected to the parent, and the question of whether it survives no longer depends on this connection. At this point the fruit and seed have the ability to grow up into a plant. Apologies to biologists.”

“Wine is alcohol made from fermented grape juice. When looking at the tense of the verbiage, you notice that ‘fermented’ is in the past-tense – meaning that the fermentation of the juice has been completed. With that being said, I believe a wine is born when the fermentation is complete – aging in oak, concrete, stainless steel, bottle, etc. does impact a wines flavor profile, but to my mind the wine is already born.”

“I will give you the short version.  The wine is ‘birthed’ once we put it into bottle.  Then it is finished and can be enjoyed as we exactly intended it.  Yes, it may not be ‘optimum’ and need aging to give the full pleasure but ideally it is ready, give or take a few weeks to recover from bottling.”

Late addition: Brent Kroll, Sommelier and Founder of Maxwell Park, one of DC’s most respected wine bars, and one of Food & Wine’s 2018 Sommeliers of the Year:

“I believe a wine is birthed when the grapes are harvested from the vine.  Wine can always be manipulated or adjusted past that. Often what happens past that is beneficial to protect the wine but sometimes they are over enhanced and that year of the harvest can be hidden. Those grapes are what speaks for that year in my opinion and lines get too blurred if you open the door past that. On the other hand, the only exception I might grant, even though I wouldn’t, is sparkling wine. I can see how something being 10 years old past disgorgement or being disgorged 10 years after the harvest are completely different. It’s hard then to judge the age by the vintage but I still stick to my initial thought. If you have to put a vintage on mixed vintages I would take the average based on the quantity of each vintage in the wine.”

And there you have it: no consensus on a wine’s birthday. Like the abortion debate, it rages on.

2 thoughts on “When is Wine Conceived?”